Who The Hell Will They Draft? Hillsdale OT, Jared Veldheer

Share All sharing options for: Who The Hell Will They Draft? Hillsdale OT, Jared Veldheer

Veldheer is a small school prospect drawing a lot of attention and it's not hard to see why. At just over 6'8" and 312lbs with the athleticism to place among the top OTs in the 40, bench, vertical/broad jumps, 3 cone drill and 20 yard shuttle Veldheer turned heads at the combine. He's not all freak size and athleticism though, Veldheer was a 4 year starter at LT for Hillsdale, dominating D-II competition. Veldheer stood out to scouts at the Texas vs The Nation game (the same place D-III product Pierre Garçon showed off great skills). 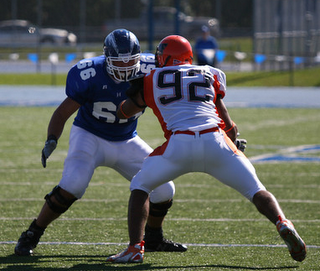 Beyond level of competition, the concerns with Veldheer are some of the shortest arms in the LT class, pass pro technique still being a bit raw and not getting great push in the run game (though filling out that 6'8" frame more could help with that).

It's hard to judge Veldheer as a top talent considering the extremely low level of competition he faced. What he looks like, though, is a strong developmental tackle with solid athleticisim. Definitely a project.

Has been able to dominate on strength alone in D-2; may need some time to adjust to next-level defender's speed.

Veldheer is usually projected from the mid 2nd round to the late 3rd. With the jump in competition he's unlikely to be a day 1 LT, but with his tools and experience he could possibly contribute at RT or G early. He's a project, but has the athletic tools of a pro-LT and the frame to be a massive mauling RT.