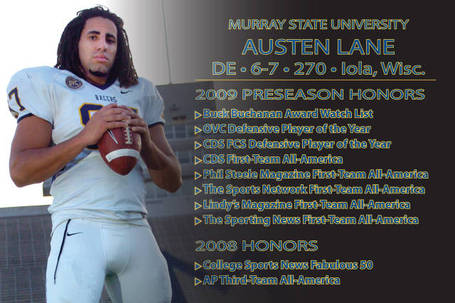 Lane is one of the early risers of the 2010 draft . A three year starter for Murray State, Lane began his career in 2006 as a sophomore when he started nine out of ten games recording 34 tackles, 3.5 for loss, with 2.5 sacks. Lane made a big impact in 2007 when he had 3.5 sacks in 48 total tackles. But, his breakthrough campaign came last fall when Lane posted an impressive 63 tackles, 22 for loss and 12 sacks year.

Austen Lane has good size (6'7 - 259 lbs.) and strength, and can be extremely disruptive in the open field as a powerful tackler. He is a great athlete with elite initial quickness and an explosive first step; has excellent speed, recording a 4.89 40 time at the Combine. He is great at turning the corner and has good closing burst to the QB. Lane is an intelligent player and has a great feel for the game, with a passion for rushing the QB.

Lane needs to show more effort when it come to the run game. Lane also needs to add bulk and lower body strength. Lane's biggest problem against the run is he tries to avoid blockers and is knocked out of position easily, so his technique needs to improve.

At times, Lane was a dominate force, but he is better fitted to the 4-3 base defense where his athleticism and versatility can be better harnessed. A playmaker with room to grow, Lane could become a solid contributor in the NFL. Once viewed as a late Day two pick, Lane is moving up the charts fast. Expect to hear his name being called by the middle of the third round or early fourth.

One factor that cannot always be ascertained by a prospect's workout times or position drills is his frame. Certain players just have a build that has yet to mature. A guy who has yet to reach his physical peak can be enticing, because it means he has room to develop more body mass and strength. Murray State DL Austen Lane is one such player. At the Racers' pro day, he was 6-foot-6 1/8, 274 pounds, but his frame indicates he could very easily go up to 295 pounds and remain effective. He ran the 40-yard dash in 4.89 and 4.98 seconds, had a 4.44-second short shuttle and did 20 bench-press repetitions at 225 pounds. He stood on his vertical jump and broad jump from last month's NFL Scouting Combine. In total, six players worked out outdoors on FieldTurf for 10 team representatives

Lane was a four-year starter for the Racers. He has good size and strength for the position but lacks great range and quickness. He makes more plays with effort and persistence than athleticism. He doesn't have great speed to close to the ball and lacks good flexibility to bend down the line of scrimmage. Lane leverages the ball well with good hand use and proper technique. He needs to expand his pass-rush package with more counters off his initial power move. Lane played best against lower-level competition and was somewhat held at bay when stepping up against better competition.

If Lane falls to the Colts in the 3rd, they have to grab him up. He would be a good relief for Freeney and Mathis and could potentially replace one of them in time. He's a great pass rusher, but needs help working on his run defense. Lane's stock is rising so don't be surprised to see him go in the mid to late 3rd or early 4th round.