NFL Draft Grades: The 2010 Draft for the Indianapolis Colts

Share All sharing options for: NFL Draft Grades: The 2010 Draft for the Indianapolis Colts

In general, draft grades are dumb. But, like the hypocritical schmuck that I am, I present to you my draft grades for the eight picks the Indianapolis Colts made in the 2010 NFL Draft.

Why make draft grades if they are "dumb?"

Well, aside from the fact that I enjoy second-guessing the future-Hall of Fame personnel director of our beloved organization, draft grades are good because they kind of hold me accountable to my opinion. This way, next year, when I get pissed that Bill Polian takes another injury-prone corner in Round Three, all of you can remind me that I didn't like the Jerraud Powers pick in 2009 either.

(Of course, I could counter that very few of you liked the Powers pick yourselves. But, hey, no one but Peyton is perfect)

The point here is that it is kind of my job to put myself out there and let my opinions be judged for nothing more than what they are. And, if I'm wrong, I take my lumps. I'll let you in on a little secret though: When I'm wrong about a pick, I'm actually quite happy. I never like to see us select a bust, and I always like it when players I seem to dislike end up becoming good.

So, without further annoyance (too late), after the jump are my lovely Colts draft grades for 2010.

I think a "B" is pretty fair for this crop. Rounds Two and Three really bring the whole thing down a notch, but the Hughes pick and the selections in Round Seven add some excellent depth and personnel options to all three areas of the team. As always, Colts drafts aren't "sexy." They seemed to be the only team that didn't get involved in a trade over the draft's three days. The Colts just quietly go about their business, plucking quality players in later rounds and developing them into significant contributors.

That said, here's a nice photo I took from my seat during one of the Colts third round draft selection: 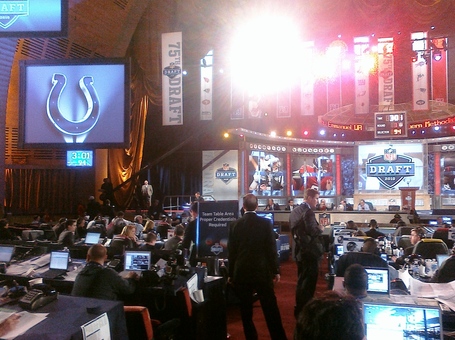