A Look at a Few Available Experienced OTs

Share All sharing options for: A Look at a Few Available Experienced OTs

A key need for the Colts this offseason is to upgrade the O-Line, specifically at left tackle.  Typically, teams have four ways to fill a need - through the draft, via trade, by signing a restricted free agent to an offer sheet, or via unrestricted free agency.  Unfortunately, due to the "Final Eight" rule, the Colts do not realistically have that last option available.

This post explores a few experienced players available and grades the likelihood that we'll see a move toward them. 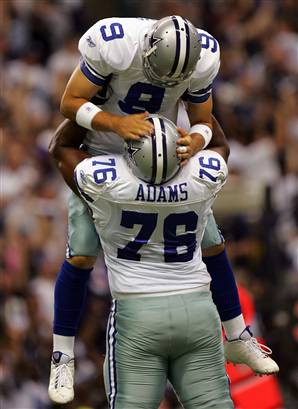 I don't follow the NFC, but even I am aware of Flozell's propensity to be a penalty machine, both for personal fouls and for false starts.  The guy actually has a Facebook fan club devoted to his false starts! A possible explanation for the latter is that Flozell is partially deaf in his right ear.  For a guy who plays LT, this is a serious liability - and if we're looking for someone who can wait patiently while Peyton goes through his pre-snap calls, Adams has a knock against him.

Although Adams is huge, I just don't see the Colts pursuing a guy who by NFL standards is geriatric.  The penalty situation seals the deal.  Polian prefers young, fresh talent, even if it is unproven at the pro level.  But, Adams is technically an option, so I decided to include him. 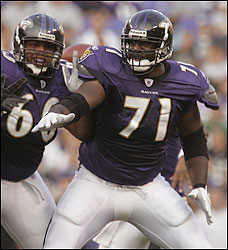 Gaither has proven his ability at the pro level, and barring additional injury, still has many years ahead of him.  In 2009, neck, foot and toe problems kept him from starting all except 11 games.  He did suffer a scary neck stinger against the Patriots that resulted in his lying on the field for 15 minutes and having to be carted off.

The commitment comments would cause me a little concern, and his name hit the radar recently when John Harbaugh called him out for not immediately attending the off-season conditioning program.  Still, the scouting report comments are a bit dated and he did eventually appear back in Baltimore.  He has even been a good soldier recently, proclaiming on Twitter how happy he is to be back with the team (wink, wink). 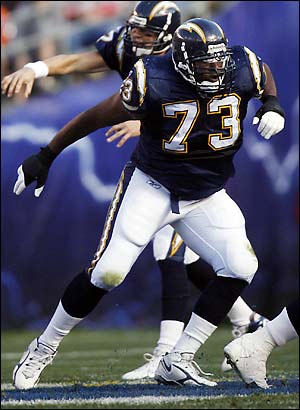 A 2nd round pick out of Auburn, McNeill is a two-time Pro Bowler (as an alternate) who has started all 62 games in which he's played.  By all accounts, the guy is of solid character, and he's also tough, playing with both hands broken in 2006!  Tendered at the first round level, there's a chance he would be available, but Kevin Acee of the San Diego Union-Tribune believes the Chargers would match any offer sheet.

Mike Florio <3's the idea of the Colts pursuing McNeill, but it seems unlikely that Polian would spend a lot of energy to put together an offer sheet that would likely be matched.  I also don't see him employing the poison pill tactic; as much as the Colts might want to stick it to the Chargers (who have killed a couple of their playoff runs), poison pills breed bad blood.  During this time of CBA uncertainty, management needs to remain united and Polian is too smart to piss off someone who he has previously lauded as "a quintessential football man."

Below is a list of Tackles listed on NFL.com as either Released or RFA.  I believe that those whose 2010 team is listed have simply signed their RFA tenders, but that offer sheets are still possible.  Let me know if any of these interest you and I'll do some digging: