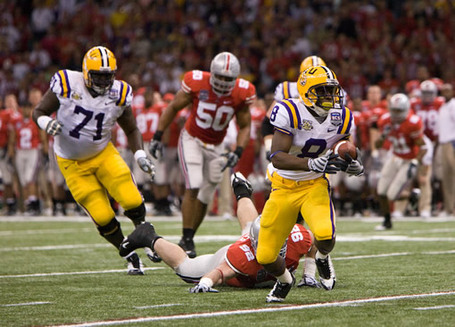 Im surprised no one on here has done a draft profile on any of the return specialists yet despite the glaring hole the Colts have had in that area. For what seems like centuries now, the Colts have never had a good all around special teams unit. Part of it is because of the amount of money that is being invested in high profile players. The other part of it is the inability or refusal to take a player who's sole purpose is to make special teams plays. This is because Polian's draft philosophy is to take players who;s value can be maximized by using them in multiple situations. Players like Devin Hester dont really fit the bill because they are limited to Go-Routes and bubble screens when not doing kick return duties. Holliday, however, is highly versatile and can make plays all over the field.

Holliday's main asset is his speed. A track star at LSU, Holliday is considered to be the fastest man in college running the 100 meter dash in 10.00 seconds. His 40 times are consistently in the low 4.3's and some scouts even clocked him as low as 4.2 flat. His tremendous speed has given him the ability to be highly versatile as he lined up everywhere in the LSU offense from WR, to slot, to RB. However, his true value comes in the return game. Here are what the scouts have to say:

Release: Has not been challenged with the jam, as he is often lined up well behind the line in the slot or in the backfield. When free to take a step or two off the snap, is very tough to stay with in the second level or beyond in man coverage because of pure quickness and straight-line speed.

Hands: Small hands that are suspect as a receiver, rusher and returner. However, can make tough catches in traffic, against the sidelines and when gunners are bearing down on him. Able to extend away from his frame to snap up wide throws but has a tougher time reaching over his head, which is a problem for a smaller receiver. Allows the ball too far into his body when facing the quarterback.

Route running: Great quickness on his cuts, but could run his routes more crisply and get on the same page as his quarterback based on the coverage. Tough to find on crossing routes over the middle without a clear lane because of his lack of size. Has the speed to be a deep threat but will not win many jump ball battles despite a nice vertical.

After the catch: Extremely quick when running with the ball in his hands. Shows good vision to find holes in traffic, and is tough to find among the big bodies on returns and as a running back. Difficult to bring down even when visible to would-be tacklers, often bouncing off due to his strong running and low center of gravity. Doesn't have immediate acceleration, but finds a second and third gear once in the open.

Blocking: Won't offer a lot as a blocker because of his size, but is not afraid of contact. Has a relatively strong build for his size. Gets in the way of cornerbacks and safeties in the few chances he gets to run block from the slot. Willing to mix it up in pass protection but lacks the bulk and length to hold off blitzing pro linebackers for long.

Intangibles: Plays with a chip on his shoulder from being labeled too small to play major college football. Is tougher than one would expect given his size; is a football player with track speed, not vice versa.

Track star with blinding straight-line speed. Explosive player who only needs a little seam to break a big return. Reads the ball quickly in the air and gets underneath it fast. Waits for his blockers to engage and finds running lanes. Fluid through the hips and makes people miss in space. Holliday is very short at under 5-feet-6 and does not have the bulk to break tackles at the next level. Starts too fast and does not show the ability to hold an extra gear for the end of the return. Lacks the awareness and route-running ability to be a factor in the passing game.

The big knock on Holliday is that he is too small, but as we have seen with the Colts, they have never been a afraid of that. Despite the amount of talent the Colts have at the skill positions, it never hurts to give Peyton Manning more weapons, even if its in an indirect way by changing the field position game. A dynamic kick returner like Holliday will provide relief to all three phases of the Colts.