Share All sharing options for: More proof that the NFL owns your soul: Patriots fans at Butler v. Duke game

First off, don't shed any tears for Butler. Heads high. In ten years, no one will remember that Duke won last night. Well, Duke fans will remember, but no one gives a crap what they think anyway.Everyone else in the free world will remember that a school of 4,000 with an athletics budget on par with the money Mike Krzyzewski wipes his ass with took an NCAA powerhouse to the limit. It was fun, magical, and entertaining ride. It was everything sports should be. The fact that it was all done in downtown Indianapolis made it even more special.

Butler won the tournament even though Duke gets the trophy. People will remember the upsets, the toughness of the team, and the raw, intense style of basketball both schools displayed on the court.

Second, to honor baseball commissioner Bud Selig's silly whining about the Donovan McNabb trade upstaging the opening day of Major League Baseball, we offer yet another example of how all these other supposedly "major" sports are really just filler during the long NFL off-season. Last night, at the NCAA National Championship Game, a few New England Patriots fans decided to invade The Luke and run around with signs like this one: 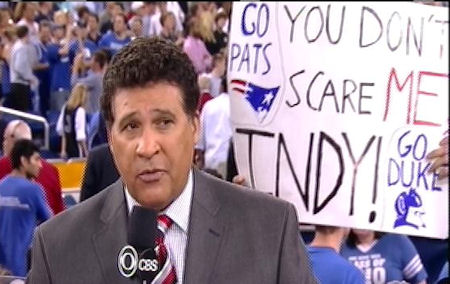 Again, the NFL dominates the world and owns your soul. This is the friggin NCAA Championship Game, and these schmucks were still motivated enough to make signs like this bashing the Colts and screaming "Go Pats!"

Chump rivalries, all of them.

Only one rivalry means anything: Patriots v. Colts. Why? You won't see people holding up "Go Duke!" or "Lakers suck!" signs at a Pats v. Colts game, but you do see Pats and Colts signs at an NCAA Final Four Championship Game. God bless the dudes who dangled this sign behind Greg Gumbels' mug.