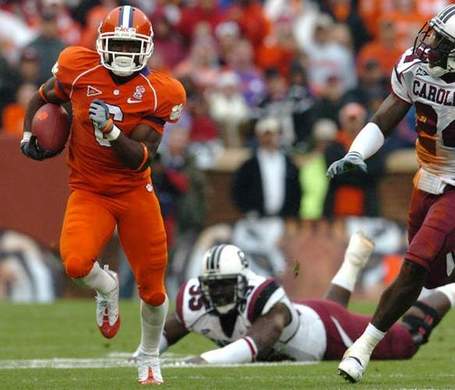 A lot of you aren't too thrilled with the prospect of Trindon Holliday because a) He wasn't very productive and b) he is too short *roles eyes*. I can see the first part, the second I think is just ludicrous. But since size means so much to you guys, I decided to profile someone bigger. Meet Clemson WR/KR Jacoby Ford, another one of the more intriguing prospects projected to be a dynamic kick returner in the NFL.

Like Holliday, Ford possesses blazing speed clocking in a 4.28 40 at the NFL Scouting combine. Unlike Holliday, though and to the pleasure of everyone else, Ford weighs about 20 lbs. heavier and has another 4 inches as he checked in at 5'9 186lbs. He wasn;t extreamly productive, but his numbers were fairly decent at Clemson, putting up 1,986 yards and 16 TD's after 4 years with his best years coming as a junior and senior where he put up consecutive 700+ yard seasons. The Scouts have this to say about him

Mocking the Draft (Brief Write Up Only)

A track star, Ford makes his name going deep over the top. He's elusive carrying the ball and should be a good punt returner at the next level. Tracks the ball well and really knows how to pick apart a zone. Typically has the agility to get off the line smoothly, but can be jammed by quick corners.

Release: Good lateral quickness and underrated upper-body strength to escape the jam. Few defenders attempt to jam Ford due to his elite timed speed, explosiveness off the snap and smooth acceleration.

Hands: Generally looks the ball into his hands to make the secure reception. Has a tendency to allow the ball to get into his chest and will drop a catchable passes on occasion. Can snatch the ball outside of his frame and has improved adjusting to poorly-thrown passes. Good toughness to maintain control despite taking a big hit. Good hand-eye coordination and balance to track the ball over either shoulder.

Route running: Used predominately as a deep threat early in his career and still learning the nuances of running routes. Developing as a route-runner but has good foot quickness and balance to ultimately excel in this area. Rarely asked to go across the middle but has made strides when he's asked to do so.

After the catch: Faster in a straight line than he is quick. Doesn't dazzle with his lateral agility to elude in tight quarters, but if given space can be quite elusive and make defenders miss in the open field. Good vision to find the lane and has an explosive burst to squirt through the hole and into the open. Lacks the strength and size to run through tackles and too often goes down with initial contact.

Blocking: Only a pesky blocker despite good overall strength and competitiveness. Provides a pop to the cornerback and looks to help downfield.

Intangibles: Has the physical tools to develop into a better pro than collegiate receiver. Well-built athlete with a football player's physique -- as opposed to that of a track star -- who shows the willingness to run through traffic. Experienced return specialist with two career kickoff return touchdowns. The 2009 national champion in the 60-meter dash. History of injuries teams will more closely investigate. Missed the final five games of the 2007 season with a broken ankle; suffered a pulled hamstring during the NCAA Track and Field Championships that slowed his progress during this '09 preseason.

Ford is a premier track athlete with excellent timed top-end speed. Exhibited great foot quickness as a returner and running reverses in college. Flashes the ability to adjust to off target throws and bail out his quarterback. Was a very productive player whose team always tried to get him involved early and often.

Ford lacks the prototypical size of a perimeter NFL receiver. Is a raw route runner, who doesn’t always get in and out of his breaks smoothly. Return potential is there, but return skills could use some refinement. Despite his track speed, open field running could improve.

Unlike his counterparts, he isnt short and unproductive (Holliday) and he isn't short and productive but with character falws (Brandon Banks). The Colts must invest in a kick/punt returner because for too long, it has played a factor to losses in some of the Colts biggest games.  I think Ford fits the bill for the hole that needs to be filled