The Winds of Change: A.J. Foyt and Casey Irsay

Share All sharing options for: The Winds of Change: A.J. Foyt and Casey Irsay

We've noted that there has been a lot of subtle change surrounding the Colts this off-season. It might not be the kind of sweeping, splash headline stuff that we went through last off-season (new head coach, new defensive coordinator, long-tenured assistants retiring and then un-retiring, and so on). But, the change this year has been almost as significant, just with fewer headlines.

Again, not headline-stealing changes, but changes that make this coaching staff very different from the staff this team had tremendous success with from 2002-2008. During that seven year stretch, none of the major assistant coaching positions changed over. Not one. The assistants still working the same job today are running backs coach Gene Huey, defensive backs coach Alan Williams, linebackers coach Mike "Murph" Murphy, and d-line maestro John Teerlinck. Gone are Russ Purnell, Ron Meeks, and the before-mentioned Howard Mudd. Everyone else is new or re-shuffled in some capacity.

But this post isn't necessarily here to talk about change winds in the coaching staff. It's talking about change in general, and no bigger change can happen than change at the top. The top for the Colts is Jim Irsay, and the speculation is that on the day Peyton Manning hangs them up, Jimmy Irsay will hands the keys to the one of the best franchises in the NFL to his daughter Casey and her husband, racecar driver A.J. Foyt IV.

The Indy Star's Curt Cavin recently ran a piece on Foyt, the grandson of race car icon A.J. Foyt Jr. Foyt Jr. is one of two drivers to win the Indianapolis 500 four times. Now, he runs a racing business which allows his grandson to take a break from his "day job" to race in the Indy 500. "Foyt 4," as I shall call him, works for the Indianapolis Colts as a scouting assistant. From the Star:

He watches videotape of college football players and prepares clips for other team personnel to review.

"If you're No. 33 at some school," Foyt said Friday in Gasoline Alley at Indianapolis Motor Speedway, "I watch every good and bad play you've ever made."

Foyt, 25, stresses that he doesn't make an evaluation of those plays except to select which ones go on the tape.

"I make no decisions on what's good and bad," he said.

Foyt took the job on the advice of his father-in-law, Jim Irsay, who owns the team.

The last line is somewhat interesting, and highlights what I am trying to get at here. Foyt 4's family legacy is racing. He's a racer himself. However, he is also married to Jim Irsay's daughter, Casey. Casey and Foyt 4 are expecting their first child soon; a boy they plan to name (you guessed it!) A.J. Foyt V.

So, why would Jim Irsay ask a race car driver whose granddad owns his own racing company to work for the Colts as a friggin scouting assistant?

I think the answer is fairly obvious. 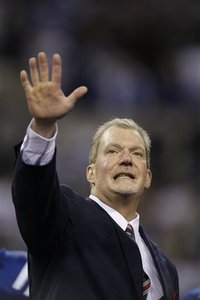 The marriage of the Foyt and Irsay families in Indiana is a marriage of Hoosier royalty. If this were translated onto a more national stage, it would be like Barak Obama's daughter (grown up, of course) marrying a Kennedy. To quote VP Joseph Biden, it's a "big f*cking deal" in the Hoosier state. Now that Foyt-Irsay union is expecting heirs, the natural course of discussion shifts to transition of ownership.

When Jim Irsay retires, (he said he'd do so when Peyton Manning does), who will take over this franchise?

Has that transition process started? Which of Irsay's daughters will have full control, Casey or her sister, Carlie Irsay-Gordon? With Foyt 4 advised by Pappa Jim to take a role with the team, does that mean Casey is the logical successor, or is Foyt 4 the man who will one day stand next to the first round draft pick and smile for the cameras?

More importantly, when this ownership transition begins, will it mean we fans will be subjected to the pre-Jim Irsay years of football, when we had guys like Pagel and Trudeau losing football games for this franchise.

I'm typing up all this change discussion partly because of a conversation I had with 1070 The Fan's Eddie White last month. He told me, on-air, that Colts General Manager Chris Polian had more to do with this 2010 Draft than previous ones, suggesting to me that Chris was making some of the final draft day decisions and not Colts President Bill Polian (Chris' father). I didn't get a chance to follow-up, but that little tidbit got me thinking: Are we in the middle of a very subtle, but active, change process right now?

For seven or eight years, we had very little (if any) change from the top down in terms of ownership, management, and coaches. Now, we seem to have a lot of very under-the-radar transition happening here. Obviously, change is expected at some point, and it will probably not be as drastic as everyone thinks it should be. Bill Polian could "retire" as soon as next year, but the team would likely keep him on as a consultant like they did Dom Anile for years. Chris Polian would assume the role of President while Tom Telesco (the real behind-the-scenes man who does some brilliant stuff to help this team win) would be promoted GM. 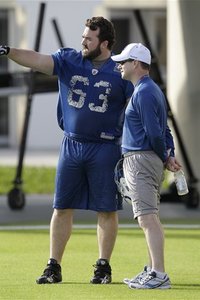 Meanwhile, Caldwell is not likely a long-term solution as head coach. He's 55 years old, and if he is lucky and fortunate enough to stick around until Manning retires, he'll likely be 60. For Caldwell to manage that, he'll need to win a Super Bowl within the next two years. Fans were not happy with how he coached Super Bowl 44, and regardless of how much success he had his first season, all that did was raise the bar for this upcoming year. He must top the 2009 success in seasons two or three before fans start to turn on him (i.e., boo him at games). I personally like Caldwell and I do not give him the grief many others do for the Super Bowl, but he is not Tony Dungy ala 2002 coming from Tampa Bay. He doesn't have the respect-level that other coaches like Jeff Fisher or Andy Reid have. Caldwell needs to win a Super Bowl or the fans and press will start to ask why he is running the show over people like Bill Cowher or Jon Gruden. Hell, "Chucky" even said recently that if he were to return to coaching he'd want to go to Indianapolis. You don't think two young, potential owners-executives like Casey Irsay and Foyt 4 find that more appealing than a 55-year-old Jim Caldwell?

All this talk of the future is fun, and at this time it falls into the "total speculation" category. But, for just about a decade, this club had amazing consistency from the top down. Soon, that all may change. Already, we are seeing the winds of it (see changes to coaches). How this will affect the team in the win-loss column remains to be seen.