Luke Links: The "Pump in the Noise" Edition

Share All sharing options for: Luke Links: The "Pump in the Noise" Edition

Many of you are aware that the Colts had been accused of pumping noise into the RCA Dome, most notably during a game against the Patriots in 2007.  The strange noises were eventually traced to some glitches in the CBS broadcast.  Of course non-Colts fans will dispute this, and I'm not really here to confirm or deny the accusations.  Technically, I don't know whether noise was pumped in, and even if I don't believe it was, I won't convince someone who does.

What I AM here to do, however, is to present my idea for a more natural approach to helping the crowd make noise.  That's right, folks, I present to you... the Colts Vuvuzela: 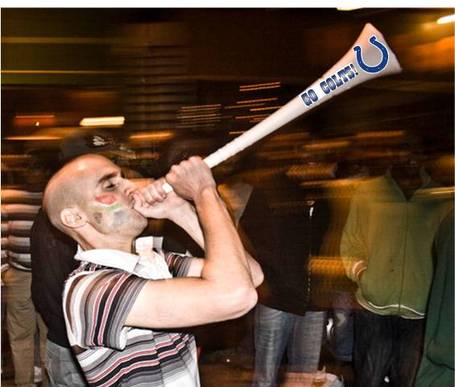 Ok, now on to today's links:

FROM THE SADDLE
Official Team News

OUTSIDE THE STABLE
Around the League

And a final note: the links are a bit abbreviated tonight because I am still suffering from a root canal I had on Friday.