Today, the Colts opened their 2010 mini-camp for veterans and rookies. This camp is one of two events that are mandatory for all signed Colts players, with the other being Training Camp. Unlike Training Camp, rookies who are not yet signed can attend mini-camp. For these rookies, mini-camp is a critical opportunity for them to work with many of the established Colts players, like Peyton Manning, Jeff Saturday, and Gary Brackett.

However, one area where there likely won't be much significant rookie involvement is the safety position.

Oh sure, the Colts have rookie safeties like Donye' McCleske and Mike Newton on the roster, but I'm not holding my breath that these guys are going to be starting caliber safeties. Then again, I probably felt the same about one-time undrafted rookie safety Melvin Bullitt (2007). Now, look at him. He was the Colts starting safety last year.

For me, mini-camp at the safety position is less about integrating rookies and more about watching the continued progress of a big time game changer: Bob Sanders. 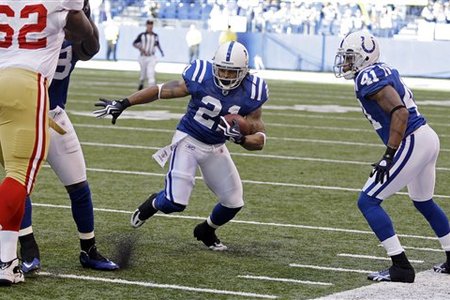 I don't like saying or typing any of these things, but they are unfortunately the truth.

What I hold out hope for, what I secretly wish, is that in Bob Sanders comes back in 2010 and renews my faith. Other than Dwight Freeney, Bob Sanders is the biggest game changer the Colts have on defense. If I could equate their value in these terms: Dwight Freeney will get you to a Super Bowl, and Bob Sanders will help you win it. I think the world of Melvin Bullitt, but I cannot help but wonder if Bob had played in Super Bowl 44, would the Colts have won? Would Bob have made one of his signature plays?

A forced fumble in a key situation?

If I think too much about it too much, I might go nuts.

For 2010, a healthy and active Bob Sanders changes the entire dynamic of the Colts defense. I mean, really changes it. I start getting excited, counting down the days until September, when I think about Bob Sanders blitzing  from a Cover 3 look (aka, the Bob Sanders Beatdown Defense, or BSBD). Remember what Bob did to Vince Young in Week Two of the 2007 season? Just think of that, but on a consistent basis.

One possible way the Colts could make certain Bob stays fresh (aka, healthy) throughout the year is by rotating him with Bullitt. Every series, the two rotate at strong safety. Maybe on certain downs and situations, both are on the field. The idea is to cut Bob's plays in half so that, in theory, he is ready for a possible playoff push.

Again, this is the advantage of having someone like Melvin Bullitt.

One alignment that has me intrigued is a possible nickel package that shifts into a 4-3 Cover 2 look, with Bob Sanders as the linebacker. The Colts place on the field a 4-2-5 nickel package with Bullitt as the nickelback, which he has played before. You then shift, pre-snap, Bob Sanders down into the box while Bullitt takes Bob's spot covering his half of the field. Thus, you go from a standard pass defense to one that is more flexible to run and pass.

It's a simple idea, but one that lots of variations can stream from if a game changer like Bob Sanders returns to form in 2010.