Share All sharing options for: Don't make Colts rookie linebacker Pat Angerer angry... you wouldn't like him when he's angry

Comcast has generously agreed to support the best NFL community around -- us!  As part of that effort, between now and the end of the 2010 NFL season Comcast will be sponsoring a variety of special editorial and interactive features on our site.  They begin today with the launch of the Comcast HD War Room, your weekly destination for key draft insight and opinion.

With the recent news that Ed Norton will not reprise his role as Dr. Bruce Banner (aka, The Incredible Hulk) in the upcoming Avengers movie, I thought we'd spend some time chatting about another guy who turns superhuman when he gets pissed: Pat Angerer.

I know from a good "source" that Joe "shake n bake" Baker is very excited the Colts drafted Pat Angerer. Of course, I was the schmuck who said he was a "reach pick" back in April, and I still feel that way. However, despite that, it's not like Pat can help what pick Bill Polian chooses to take him at. And it's not like Pat projects as the second-coming of Gilbert Gardner, or anything. Like Joe, I'm happy the Colts have added another fast, explosive defensive player from the farm system that continues to provide Indy with great talent: The University of Iowa.

Angerer's position coach at Iowa last season was Darrell Wilson. In 1999, Wilson was an assistant coach at Rutgers University where he saw, up close, a 19-year-old walk-on named Gary Brackett. In 2010, Angerer will be Brackett's primary back-up at middle linebacker. As Bill Polian said on Day Two of the 2010 NFL Draft:

Other talent evaluators had some pretty positive things to say about Angerer. But, what can he bring to the Colts in 2010? Why was he drafted at a spot where the Colts could have very easily gotten a starter at another position of need, like Charles Brown of USC? Will Angerer be able to contribute to a team looking to go back to a second straight Super Bowl? 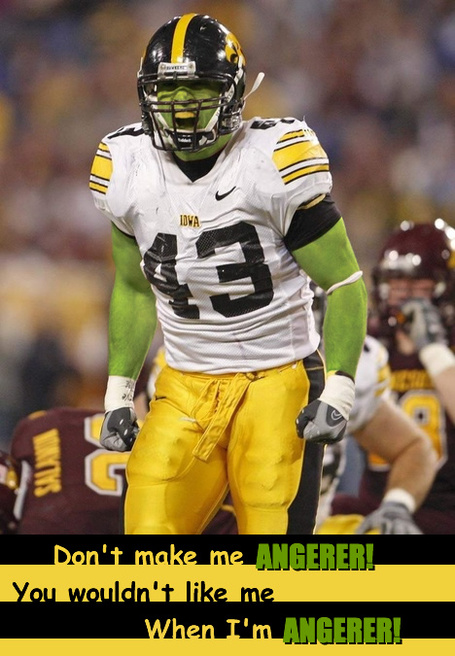 Gary Brackett seems to fit the mold of what a Colts Tampa-2 middle linebacker should be. Since he took over the starting MIKE duties from one-time starter Rob Morris in 2005, the Colts defense has transformed from a once laughable collection of cast-offs to a feared unit of gale force dynamos capable of shutting down any offense.

But, Wild Cat aside, when the Colts faced three of the top rushing offenses in football during the playoffs last year (Ravens, Jets, and Saints), Indy shut them down and Gary Brackett was a big part of that.

Flash back to late-November 2008, when Gary was carted off the field with a broken leg. Having fought through that whole year, dealing with multiple injuries to several key players, for the Colts to lose Brackett at that time was pretty devastating. His absence was mostly felt in the playoff game against the Chargers, where Darren Sproles had a monster game running for 105 yards and 2 TDs while tight end Antonio Gates had 8 catches for 87 yards, including several key third down conversations in overtime.

I think the lose of Brackett for the month of December in 2008 and the subsequent playoff game did not sit well with Bill Polian. It's probably one of the reasons why he was so steadfast in defending the decisions surrounding Week Sixteen last year. In 2010, Polian probably did not want to see a repeat of what a Colts defense would look like sans a Brackett-type linebacker.

Thus, Pat Angerer was drafted in Round Two.

Obviously, the follow-up question many have asked in light of the Angerer selection is "Does this mean the Colts don't think Brackett has much of a future in Indy?" It's a logical question, but considering the Colts just invested a five-year, $33 million dollar contract in Gary, I'd say that puts that question to bed.

Having answered that, the question now swings back around to Angerer: Why draft a guy in the second round who will be a back-up in 2010, and possibly beyond that? Second round picks are high level picks, and typically those kinds of guys should be starting soon after their selection. I mean, if a 4th 3rd round corner like Jerraud Powers is starting his rookies year, or 6th round safety like Antoine Bethea in 2006, stands to reason a second rounder should at least be on par with that.

In Angerer's case, I think this is just an example of the Colts valuing his "stock" higher than, say, Charles Brown of USC. Brown is a talented player and he fills a position of need for the Colts. However, on the Colts draft board, they likely rated Angerer higher. So, when their pick in Round Two came up, they simply took Angerer regardless of what position he played. This type of strategy has been very beneficial for the Colts in years past. Why deviate?

For me, the progress of Angerer and Brown will always be compared, fair or unfair. If Brown goes on to being a good left tackle for the Saints, then that's a dent in the Polian philosophy for the draft, especially if inconsistent offensive line play prevents the Colts from winning the Super Bowl this season.

Regardless of how it shakes out, Angerer is a Colt, and he's exactly the kind of guy the Colts love to develop and mold into professional football players. One day, he will likely replace Gary Brackett or Clint Session. I don't think he's big enough to play SAM. Until then, Angerer will need to make his mark as a special teams player, which was where players like Brackett, Session, June, and Keiaho all made their marks prior to them moving into the starting line-up as linebackers.

Comcast is a proud supporter of Stampede Blue. You’ll get your Indianapolis Colts games as a part of over 120 NFL games Comcast provides in HD, as well as On Demand game recaps from every NFL game every week, faster Internet speeds, and stunning HD. With Comcast and NFL RedZone, you get every touchdown from every game every Sunday afternoon! Call 1-800-COMCAST or visit http://www.comcast.com.