While I don't like that all the players aren't accessable to the media on reporting day, I like less that everything has to be swirled in some conspiracy theory. I love this site for all the news items, I just wish there were less black helicopters flying around all the time. Anyway, I saw the first training camp arrival picture on yahoo and I am sure they will be coming in more the rest of the day. Post any pics you can find of the players arriving.

The first one I have seen is of Adam Vinatieri. He is alive and walking around. He even brought a bike to camp: 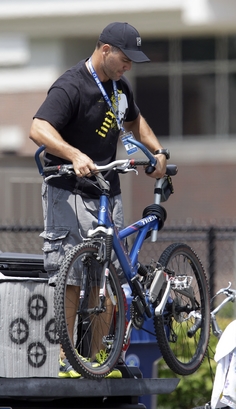 AP Image caption: Indianapolis Colts kicker Adam Vinatieri unloads a bike from his truck after he arrived for the the team's NFL football training camp in Anderson, Ind., Sunday, Aug. 1, 2010.