The 3:30pm practice today was special teams only, which when translated in rabid-Colts-fan-speak means "nobody attended." I don't even know if Phil Wilson of the Indy Star attended. What I do know is the practice did happen according to Tweets from players, and when it ended Jim Caldwell gave the players the rest of the day off.

Naturally, players were thrilled, like Jerraud Powers for example:

Auburn and Alabama collide...me and Deshae Townsend out bout to grab something to eat

So, because no one attended this glorified walk through for special teams, we'll focus a bit on the Colts updated roster on Colts.com, dated August 11th, 2010. We'll pay particular attention to special teams, and how the battle for the kick and punt returner positions is shaking out. 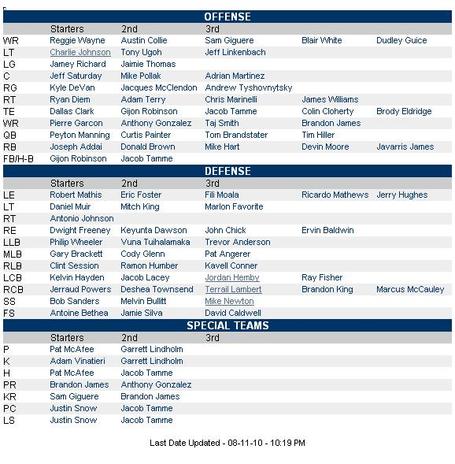 Before anyone suggests otherwise, like the last time we posted the Colts depth chart, this list is indeed official. There aren't any mistakes here, or typos, or players put in the wrong spot. This is the depth chart. It's being updated regularly now. You'll notice Andy Alleman, John Gill, and Thad Turner are gone. You'll also notice Adrian Martinez, James Williams, and Marcus McCauley (who was signed yesterday) are there.

This. Is. The. Current. Depth. Chart.

Just wanted to spell that out nice and clear. I don't think I need to make a call to the Colts PR office and ask them if this is what it says it is. This chart is accurate. Strange, I agree, but accurate.

So, that established, take a moment to focus in on the special teams section. Looking at the names, it's pretty clear Brandon James is the guy. He's listed as the primary punt returner and the secondary kick returner. The Colts seem to really value him in this capacity and he seems to know just how desperately the Colts need a dynamic return threat. From Cliff Blunt at AP:

Brandon James believes he could be a difference maker for the Indianapolis Colts this season.

The rookie free agent from Florida will return punts on Sunday in the preseason opener against San Francisco. It's an area in which James feels the Colts could use a boost.

"I was told that a return man was definitely needed here," the 5-foot-7 reserve receiver said. "Me following football over the years, watching the Colts, that's one thing they're missing. If they had better field position, their scoring percentage would be a lot better. That's what I'll try to bring."

James is now a solid pick for the final 53 (in my opinion), unless he just implodes in pre-season.

"Every once in a while, they (young players) press a little bit," he said. "They certainly are going to get a feel for the speed in this league. They have not witnessed that yet. That will give them a real good view of exactly how difficult it is to be good in that particular area."

Anthony Gonzalez as the secondary punt returner is yet another way to possibly get the football in his hands. The Colts WR corps is crowded, and Pierre Garcon is currently starting over Gonzo. By having Gonzo listed as the secondary punt returner, this tells me the Colts are thinking of using him in special situations. Brandon James has speed, but Gonzo is extremely good at makes yards after contact. So, if a team is backed up and tries to punt their way out of a jam, the Colts can stick Gonzo back there and he could potentially make something happen.

For kicks, with Sam Giguere I don't see him as anything more than a slight upgrade over Chad Simpson. Maybe he can provides more speed. Maybe he can be more dynamic. I don't know. Personally, from what I am hearing, Ray Fisher looks better. He's quicker, faster, and has more overall experience doing the job. He averaged a Big Ten record 37.4yards per return at Indiana. The kid knows how to make something happen on returns. Maybe the team isn't comfortable enough with him yet and Giguere just makes Caldwell feel better.

Caldwell said Anthony Gonzalez is likely to return some kicks in the preseason, but he's more interested in seeing the young players in action on Sunday.

One person not on the special teams depth chart, but who will likely get a shot at kick returns in preseason is Devin Moore.

All the other special teams positions seem to have shaken out as we thought they would. Special teams will be an important area to watch during the preseason game with the 49ers. Lots of second and third tiers guys are fighting to make that final 53, and special teams is often how those types of players secure spots on the active roster..