2010 NFL Preseason: Who Needs To Bring It For The 'Dress Rehrearsal' Game

Share All sharing options for: 2010 NFL Preseason: Who Needs To Bring It For The 'Dress Rehrearsal' Game

When it's all said and done, the third preseason game is the last real opportunity certain players have to win over the coaches and earn a spot on the final 53-man roster. After this game, the decision-makers are, most likely, pretty certain who will and won't make the team in early September. They'll have their practice squad targets and they'll have their eyes ready to scan the waiver wire to pick up players other teams discard.

Therefore, if you are an undrafted rookie, a late-round rookie who has yet to show anything, or a vet fighting for a back-up spot, this game is it. If you are anywhere past the third level of players on the depth chart below, you need to bring it Thursday. 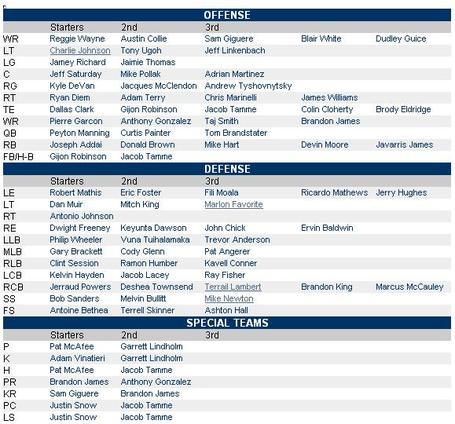 Now, obviously, players like Jerry Hughes are in no danger of being cut. Same with Brody Eldridge. But, other players on that list are only going to have a quarter (maybe a quarter and a half) to prove something. After the jump, we name those people.

We've written that he was invisible during training camp, and now in preseason he's playing with the third stringers. While players like John Chick, Mitch King, and Marlon Favorite have all emerged and made plays during preseason, we haven't seen much from Mathews. They've used the 6'3, 294 pound kid from Cincinnati at both end and tackle.

Terrail Lambert put on a show in the second half of the Buffalo Bills game, and with Ray Fisher proving his worth as a special teams returner and a gunner, the odd-man-out seems to be Brandon King. King has had an entire off-season, training camp, and two preseason games to show us something. So far, I haven't seen much.

The Colts coaches like him and Peyton Manning seems to have an affinity for him. But, last year the Colts kept only four WRs on the playoff roster. With the first four on this team set, and with Brandon James (now listed as a wideout) likely making the team because of his return skills, I don't see a place for Giguere. Also, Giguere just hasn't shown much in preseason. Dropped passes, lackluster kick returns, and an overall 'meh' game.

Terry was a turnstile against both the Bills and 49ers. He's also hurt, with the same knee injury we all feared would affect him. It's not even Week One and he's limping out there. Jeff Linkenbach offers more versatility, which the Colts often covet. Terry is, quite simply, just a right tackle. And a hobbled one at that.

Brandstater might get a few more reps in this third preseason game. Painter has played a lot in in the first two, and in both he has not looked good. The third game should give Tom a chance to show he can manage the offense. Maybe the coaches will give him a shot with the second string. If he out-performs Painters while conducting the second string offense, he'll have made his case to win the back-up QB job.

Mike might not be in danger, but Mike is hurt again and that is troubling. This is the third preseason in a row where Mike (a somewhat brittle player in the pros) has missed a game due to injury. I've been impressed with Javarris James, who is Hart's primary competition. James runs hard, falls forward after contact, and plays with the same motor Hart does. The difference is James is three years younger than Hart, and does not have the history of injuries.