The Science Of Dwight Freeney Kicking Your Quarterback's Butt

Share All sharing options for: The Science Of Dwight Freeney Kicking Your Quarterback's Butt

Dwight Freeney is the best pass rusher in the league, year in and year out. Over an eight year period, Freeney has averaged 10.5 sacks and four forced fumbles a season. Like Peyton Manning, Freeney is an absolute game-changer. Without him, the Colts defense simply does not work.

It's pretty amazing the data they found from measuring and monitoring Freeney as he demonstrated this move. Equally amazing is that they had him execute the move, in full pads, against a dummy. Then, upon competition of the move, they asked him to tackle a real, live person at full speed. 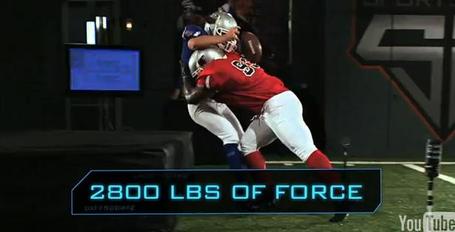 Highlights after the jump...