It's been a while since the Colts wore some kind of throwback uniform in a game. Thanksgiving Day 2004 was the last Time I can remember. Well, this year the club has decided to go back in time again, only during the pre-season as opposed to a regular season game.

Phil B. Wilson at the Indy Star elaborates:

The Indianapolis Colts will open the preseason Aug. 15 in throwback 1955 uniforms which include blue helmets, the team announced today.

The uniforms are similar to the ones used on Thanksgiving Day 2004 except the helmet color. The Colts, in 1956 throwbacks with white helmets, crushed Detroit 41-9 at Ford Field.

Not long ago, just before the start of camp, Ray Fisher posted a picture on Twitter of his helmets. Yes, helmets. Plural. At the time, your truly didn't think much of the Tweet. Today, after looking at the throwback uni images, it all makes sense. 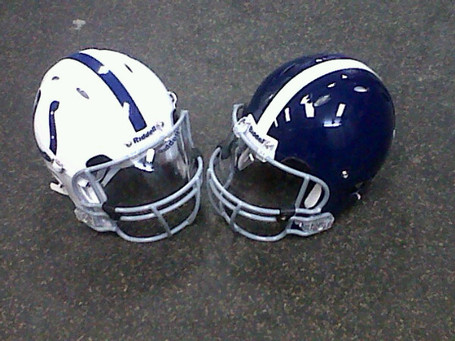 In general, I'm a BIG fan of teams using throwback unis in games. It's good to see the Colts getting in on this a bit.

Here's a little history on the helmet design:

The club’s 1955 helmets were blue, with white striping and horseshoes on the back of the gear. The historic logo was moved to the side of the helmet in 1957, where it has remained.

I guess this means that if I covered the Colts in 1955, my name would be BigWhiteShoe.