On my way to Ruth's Chris, who is Ruth n who's her Chris

When the Colts opened training camp for the 2010 season in Anderson, IN, we highlighted a Tweet photo from Colts strong-side linebacker Philip Wheeler taken during a team dinner. Wheeler posted a pic of three lobster tails; the kind of food NFL clubs feed to players during camp.

Any player who complains about how "terrible" camp is needs a kick to the groin. The Colts players get single bed rooms, free wi-fi, and are fed lobster for dinner! Oh, the humanity!

Anyway, the highlighted pic kind of made the rounds on the Internet with people poking fun at how decadent NFL life really is. Well, in an effort to remain consistent, Wheeler posted more food pics last night. And yes, once again, the man had the lobster.

For those of you who don't know, Ruth's Chris is a steak house chain with restaurants in Indianapolis. Anderson, IN (where camp is being held) is only 45 minutes away from the Indianapolis suburb called Carmel, where many Colts players live. Since the team was given Saturday afternoon and all of Sunday off, players like Wheeler and reserve backer Cody Glenn decided to hit up the steakhouse on a Saturday night.

After the jump, Wheeler's pics and his critique of the "lobster voodoo." 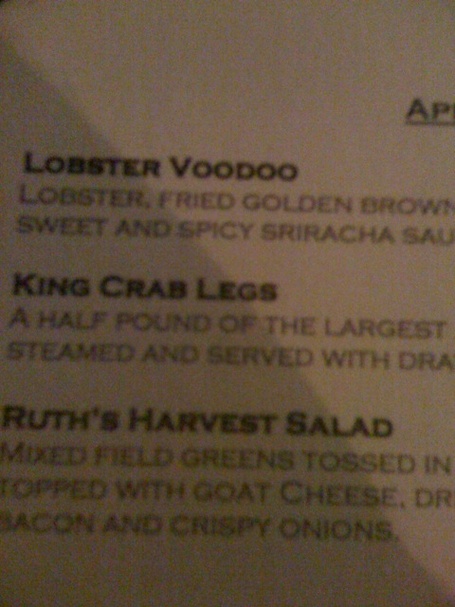 So, the "lobster voodoo" is an appetizer. It's also fried, which, for me, makes absolutely no sense. Lobster is tender, juicy, and requires very little in the way of "doctoring" in order to bring out its flavor. Boil the lobster, crack it open, and eat. That's all you need to do. Butter is also nice.

Lobster doesn't need that. When you fry lobster, it looks like this: 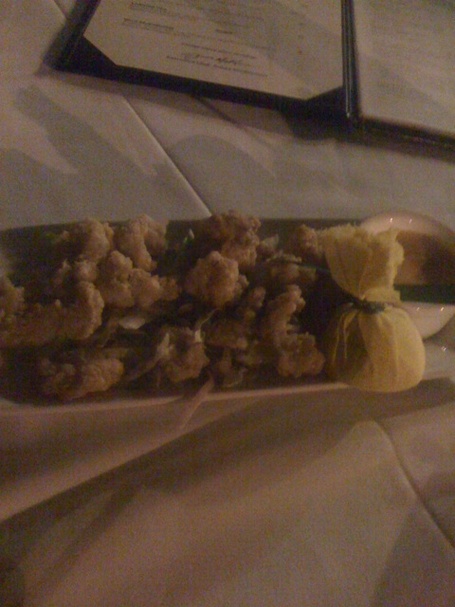 Ugh. That looks like a dog turd. Apparently, it tasted like one too, or so Wheeler Tweeted:

Don't really like the voodoo lobster, lobster shouldn't be fried taste rubbery, but Ima eat it this time

In general, Ruth's Chris food is very good (and it damn well better be when you look at the prices!). But, I'd avoid anything that involves fried lobster. Stick to steak and mashed potatoes. Please note that this advice is coming from a vegetarian who hasn't eaten a steak in six years.

Oh, and to answer Philip's Tweeted question regarding the origins of the steakhouse's name:

The chain was founded by the late Ruth Fertel, a single mother of two, in 1965, after she bought the existing Chris Steak House in New Orleans. In buying the restaurant, Fertel had to agree that the restaurant keep the "Chris" name for a specified period of time. After the original location sustained a kitchen fire, she relocated the restaurant about one-half mile (0.9 km) to the west on Broad Street and renamed the rebuilt establishment "Ruth's Chris." Under the purchase agreement, the name "Chris Steak House" could not be used at any other location, and she did not want to lose customers already familiar with the Chris name.[8] Fertel started to franchise the restaurant in the 1970s to locations throughout the United States and the world.[9]