Phil Wilson has the final roster cuts for the 2010 Indianapolis Colts. They are as follows:

Some of the players released were expected. Some weren't. I guess the NFL.com page was indeed current and Blair White is released. That's unfortunate. It also means that Keyunta Dawson and Brandon King retained spots on the active 53-man roster even though both did virtually nothing in preseason.

We've already talked about Curtis Painter. Tom Brandstater outplayed him. Anyone who says otherwise has vision problems. Yet, Brandstater was still cut. Makes no sense, but whatever. The Colts simply don't care what anyone thinks.

Phil Wilson suggests the Colts did not enter camp or preseason with an open mind as to who the back-up QB would be, which kind of runs counter to the 'everyone has a chance' mantra they like to toss around. Obviously, I question this mindset. Hence my suggestion that 'pride' is the reason Curtis Painter is still the back-up even though he is clearly an inferior quarterback to Tom Brandstater (and just about everyone else in this league). The Colts like to say their decisions are based solely on sound football reasoning. With this decision, that was not the case.

Obviously, anything can happen between now and Week One, especially if the Colts look to sign some players released by other teams. Tomorrow, the club will begin forming their practice squad, which will likely consistent of some of the players released today.

While I question the choice of back-up quarterback (Painter is garbage) and reserve defenders like Keyunta 'useless defensive end' Dawson, you know your team is good when the two things you are complaining about are back-up QB and third string defensive end. Sure, there are concerns on the o-line, but all-in-all this is a better roster than the one that opened 2009. Hard to get truly upset about that. 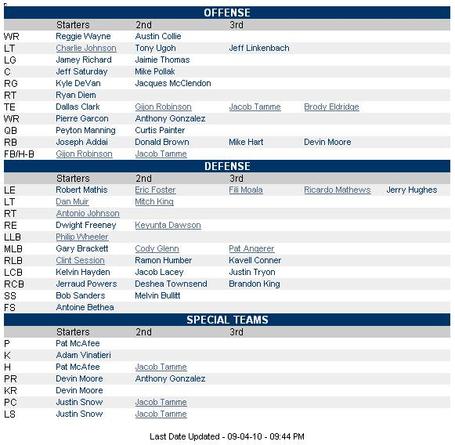 [UPDATE]: John Chick is headed to the Colts practice squad.