LovinBlue's Reaction to Yesterday's Roster Moves By The Colts

Share All sharing options for: LovinBlue's Reaction to Yesterday's Roster Moves By The Colts

This morning, with the benefit of a full night’s rest and an opportunity to read a LOT of people’s comments, I have categorized my reactions into four buckets:

After the jump, read my disclaimers and how I've graphed the various decisions...

You’ll notice that I graphed both released and retained players.  I didn’t graph certain players who I would consider obvious – Manning, Bethea, Sanders.  I also didn’t graph players who I didn’t watch enough to really have an opinion – Danny Gorer, Allen Patrick, Glenn Sharpe.  I know that this latter list includes players who many readers DID watch… it’s just that I didn’t.

One final note – this is not an overly scientific graph.  Do I really feel exactly equally happy regarding the Colts’ decision around Linkenbach as with Terry?  I don’t know, but it’s close enough. 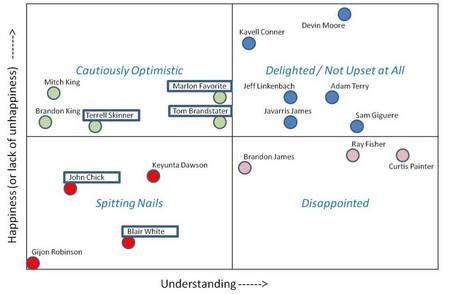 Players whose names are in boxes are my picks for the practice squad.  I did not choose 8 players, as I didn't think all released players deserve a spot there.