Andrew Luck Didn't Win The Heisman, But He Did Wear A Colts Jersey This Weekend

Share All sharing options for: Andrew Luck Didn't Win The Heisman, But He Did Wear A Colts Jersey This Weekend 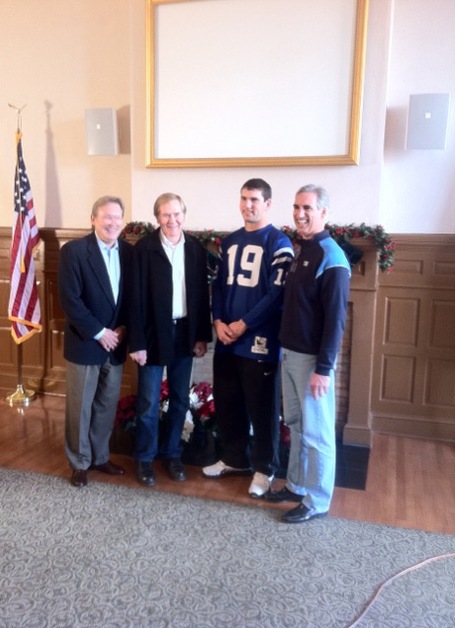 Andrew Luck didn't win the Heisman Trophy last night, but he did wear a Colts jersey on Friday while accepting a college football award. Luck and his father, West Virginia A.D. Oliver Luck, were in Baltimore at the Baltimore Sports Legends Museum for the Johnny Unitas Golden Arm Award. If you notice, it's Unitas' jersey Luck is wearing. Pictured above (left to right) are Johnny Unitas Jr., Colts legend Raymond Berry, Andrew Luck, and Oliver Luck.

The Johnny Unitas Golden Arm Award is given to the nation's most outstanding senior or fourth year quarterback in college football. Luck is the fifth player from the Pac-12 to win the award.

Interesting note: Peyton Manning recorded some words of praise for Luck, which were played during the award dinner. Manning himself won the award in 1997. He also missed out on winning the Heisman, just as Luck did.

Recently, Peyton's media mouthpiece, his famous father Archie Manning, has been flip-flopping all over himself this past week. First he said Peyton and Andrew could not coexist on the same roster should the Colts drafted Luck with the No. 1 overall pick. Then, he changed his tune. Now, Andrew Luck is on record as saying he'd be fine playing behind an established quarterback next year in the NFL.

Of course, Luck is not going to say anything controversial or stupid at this point. He did, however, make a point of how well rookie QBs are playing this year in the NFL, such as Cam Newton and Andy Dalton.

"If you look at the league right now, all the rookies that are doing so well, I think it's very possible to start," Luck said.

Again, it's worth repeating that Oliver Luck used to be a teammate of Archie Manning way back in the day. The Manning family and the Luck family are tight, and have been communicating behind the scenes. This is all part of the media game, everyone. Manning and Luck are working together to gain leverage over the Colts.

Look for more Luck-related statements on Monday should the Colts lose to the Ravens today.