What Will Happen To The Colts On Black Monday

Share All sharing options for: What Will Happen To The Colts On Black Monday 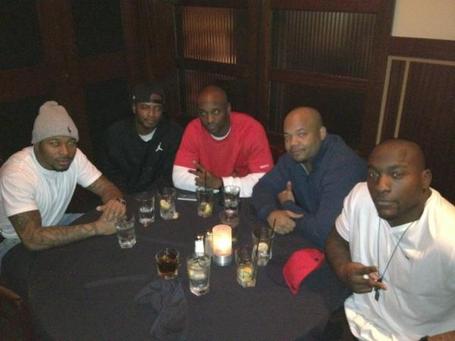 Happy New Year to you all. Hope the other holidays you celebrated before New Years were fun, safe, exciting, etc.

For several Colts coaches and many players, the new year is unlikely to bring continued employment with the NFL franchise in Indianapolis. According to Phil Wilson of the Indianapolis Star, Reggie Wayne has already removed the name plate from his locker, cleared out his items and has begun shipping them back to Miami. Wilson then said Reggie told him about the locker clean out:

'It just takes all the mystery out of it. You know? All I gotta do is say ship down here to Miami, and we move on.'

Also, likely to 'move on' is Gary Brackett, who tweeted the featured photo in this article back on December 29th. The photo came with this text:

Last of the Mohicans. Might be the last thurs meal wit OGs. If it is it's been a great run!

The team is likely to move on from head coach Jim Caldwell and most of his staff. The status of Bill Polian and his son Chris in the front office is also in doubt, but it seems less likely they will be kicked to the bricks. After the jump, several people weigh in one what could happen Monday.

Polians stay, Caldwell goes, and a Caldwell like (and very unexciting) choice is next. What's your gut?

I could see a proven and solid commodity like Mike Sherman making a lot of sense in Indy. Maybe a Jay Gruden, a Mike Mularkey, or even a Brian Schottenheimer. But whoever it is, he'll have a passing game pedigree and hopefully be able to pick up the pieces of a disastrous 2011 in Colts-dom.

If [Caldwell] goes, Jeff Fisher is the media room pick.

Again, the pattern here, the 'reading if the tea leaves,' if you will, is that Caldwell is gone. I've been saying his firing was a mere formality for over a month. Jim Irsay was clearly going to serve up Caldwell as the fall guy for this season because Irsay, from what I've gathered, simply lacks the stones to fire the Polians.

Bill and his useless sons run this franchise. Not Jim Irsay. Will Carroll agrees:

And, like me, Will also thinks that if the Polians stay, the next head coach after Caldwell will be just as underwhelming as Caldwell was.

Polian hire is usually boring and safe and someone they know.

Ok Colts fans - be REALISTIC. Who will replace Caldwell. My guess is Dom Capers. My upside pick is Wade Phillips.

So, for all of you fans out there who want Bill and Chris to stick around in the front office, get ready to have Mike Sherman or Dom Capers as your new head coach!

As we've said many times around here, coaches like Jon Gruden or Jeff Fisher want nothing to do with the Colts as long as the Polians are controlling the franchise. Bill Polian is loathed around the league, and nobody respects Chris Polian. He has his job because of his daddy, and real coaches want nothing to do with front office nepotism of that kind.

Plus, the Polians are going to impose coaching staff restrictions on the new head man. Pete Metzelaars, Ron Turner, Frank Reich, and Mike Murphy are Polian coaches. Whoever gets the head coaching job will likely be forced to work with these men. Guys like Fisher and Gruden will want to bring in their own staff. 'Yes Men' like Capers or Sherman will do whatever Bill and his sons tell them because they're just thankful to get another shot at a head coaching gig.

Don't be surprised if Norv Turner becomes a candidate for head coach in Indianapolis. Ron Turner, his brother, is (as previously mentioned) already on staff.

For us at Stampede Blue, we still maintain that Bill Polian and his sons must be fired from the front office if Indy is ever going to get back into prominence, and we're not alone in that opinion. It's time to 'move on' from the paranoia, nepotism, and horrid front office management that has defined the Polian regime since player personnel head Dom Anile and head coach Tony Dungy left.

However, change of that kind seems unlikely to happen in 2012. Jim Irsay simply doesn't have the will. The real question now is does Peyton Manning want anything to do with this train wreck of a franchise going forward. The Colts stand no chance of winning another Super Bowl with a coach like Dom Capers taking marching orders from the Polians. Anyone who thinks they do is simply delusional. Sorry, but there have to be limits to homerism.

We already know that Manning and the Polians are feuding on some level, and if Irsay refuses to dump Bill and his boys, Manning might view that as Irsay picking them over him. He could then ask Irsay to release him, allowing Peyton to win a Super Bowl somewhere else next year.

This is the state of our franchise, folks. It's a dysfunctional mess and the people in charge are, to put it bluntly, incompetent and inept. There really is no way to sugar coat things. Unless Irsay suddenly decides to grow a pair, we're stuck with more inept front office buffoonery and another puppet head coach for 2012.