Well, the Bob Sanders Era is officially over in Indianapolis. I LOVE Superman and wore his jersey for home games the last three years (maybe I was the bad luck charm) but I cannot say that I'm surprised by the move. $5.5 million for a safety that can't stay on the field is not good business in the NFL.

I know the first thing I do with the Colts as a franchise in Madden is to trade Bob for some O-Line help and extra draft picks. It's never that easy to see someone go in real life though. We become attached to the players for our team, especially when their value is so readily visible.

Enough about what Bob DIDN'T provide for the Colts. Let's look at what he did provide! Excitement, Energy, Enthusiasm, in one word... 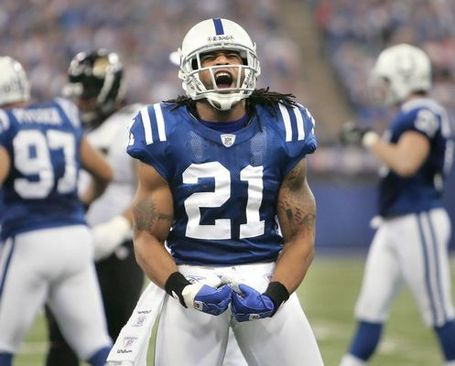 Let's look at the Colts during the Superman Era. Bob joined the Colts out of Iowa in 2004. From 2004 through 2010 there were 125 total colts games played (112 Regular Season, 13 Playoffs). Bob played in 53 of those games with the Colts going 43-10 (5-4 in the playoffs) in the games where he played. Obviously, the team was a different animal with him on the field.

While one man a defense does not make, a new mentality he can bring. That's what Bob really meant to the Colts. For some reason, with him on the field, our defense played stronger, faster and harder. His all out style permeated the rest of the defense and seemed to pull them up to a new level.

What will I remember most about Bob? That's the easiest question ever. The 2006 playoff run. Winning games with defense and Automatic Adam was so satisfying that I couldn't jump high enough (I'm a big man, I can't jump very high anyway). He led that defense to a level we never though possible.

My other thought as I watch some of the clips of Bob playing is, how much would he be fined for leading with the crown of his helmet? His big hits are unforgettable but with the new crack down on legal hits how much of his salary would he have lost?

I know it will be tough to see but I do wish Bob well. I hope he can stay healthy and salvage his career. I never want to see him play against the Colts though. THAT would scare the crap out of me. What will you remember from the Superman Era?