If you haven't been following Matt and Collin at the Combine, WHAT ARE YOU WAITING FOR?!?!  Great access that fans like us don't normally get.  Join the open thread and keep an eye on some future Colts!

With everything kicking in this week, it got me thinking about past Combines and how they went for Colts greats.  While it may not relate directly to the combine, it might also be a good time to revisit some great draft debates.  I think back expressly on Manning v. Leaf and James v. Williams.  We'll jump into some of this after the jump.

While there is no footage of Manning at the Combine (that I can find) there are some HILARIOUS pictures of Tommy Terrific out there (I NEVER pass up a chance to laugh at a Patriot!) 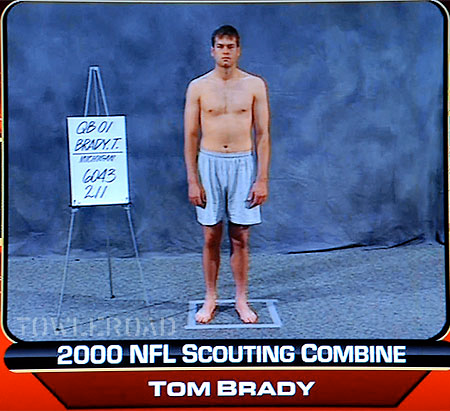 I don't know about you, but I will never get tired of watching Rich Eisen get outrun in every way by a superimposed BJ Raji from the 2009 combine.  Pay no attention to the dance section at the end of the video!

On to the parts that relate to the Colts.

This was the first major decision Bill Polian made as President of the Colts.  There is a great recap from 2008 HERE.  I was a junior in High School at the time of the 1998 draft.  I remember thinking it was an easy choice.  I wanted Leaf and was ready for him to lead us to glory.  What's that saying about hindsight?  I will admit, I wasn't smart enough to realize that work ethic was more valuable than potential.  EVERYONE said Leaf had more potential.  Think how much our franchise would have been set back if that pick would have been made.  Just an example of why they don't let high school kids run NFL Franchises.

The best anecdote to come out of that draft is the clip that they have been playing on NFL network this off-season.

I never get tired of that confidence.  Kinda reminds me of the story about Gabe Carimi from this year's combine.  I know there is such a thing as over confident, but some of that is needed for success at this level.

The very next year, Polian was faced with another TOUGH choice.   Edgerrin James was the hot shot out of the U and Ricky Williams had just broken every career NCAA rushing record.  Most pundits had Ricky as the top RB in the draft and had already put him in Colts blue.  The choice came to Polian and the Colts with the 4th pick.  The Colts took the Edge and the Saints promptly traded 9 picks to get the 5th pick from Washington and take Ricky Williams.  Both franchises took off, but in totally different directions.  My memory of that draft day was driving in my car listening to Bob Lamey's draft coverage.  After the pick came in, the first words he said were "Are you surprised?  You shouldn't be!"  Great summary of the pick.

I was on board with this pick.  After Leaf threw for 2 TDs and 15 INTs in his first season, I knew Polian had made the right call and I was willing to trust him.  Our team was gonna be good as long as he kept making strong decisions like these. That was the foundation of our current success.

I guess the point of all this is to remember that for every person out there who REALLY wants this year's version of Ryan Leaf or Ricky Williams, there is another that wants someone else just as badly.  The deep end of the pool is never a good place to be around draft time.