This is who he is. It's part of his charm. It's why so many people, including myself, like him.

However, there are times when Pat probably goes a bit too far over the line. Like, for example, when he got so stinking drunk last October that he decided to take a dip in the Broad Ripple Canal at around 4:00am in the morning. It's a stunt that almost got him killed (swimming in near freezing water while dehydrated from intoxication is like pouring gasoline all over your body and daring a friend to light a cigarette for you).

It's also a stunt that got him arrested, charged, and suspended for one game by the team.

Now, five months later, Pat seems to have a sense of humor about the whole thing. In fact, he's back out on the town, celebrating St. Patrick's Day, in the back of the so-called 'Chicken Limo,' pimping some tee-shirts that we would definitely buy a few hundred dozen of.

For those of you wondering what the 'Chicken Limo' is, this is from the limo service's Twitter page:

Party Limo service in Indiana. You can get Clucked Up while you get chauffeured around in the most Crispy Limo in the world.

And while there is nothing wrong with Pat riding in a Chicken Limo drinking what looks to be a Guiness on St. Patty's Day, we sincerely hope that Pat doesn't do anything to foolish like, say, try and swim in this river anytime soon. 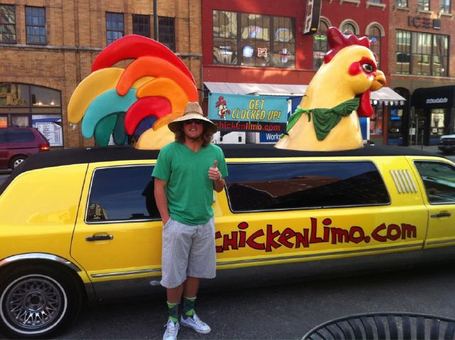