With the news yesterday that Peyton Manning had surgery to repair an injury to his neck, Stampede Blue received validation for a rumor reported last year.

Back in September of 2010, we reported that Peyton Manning had been injured sometime during or before the Week One game against the Texans. It was a season-long odyssey reporting on this rumor, which we (and by 'we' I mean myself, Matt Grecco, Collin McCollough, and David Deitz) viewed as very credible.

However, comments made yesterday by Colts owner Jim Irsay suggested that Peyton's neck injury (which required a second, unrelated surgery to the one he had in March of 2010) did not occur during the 2010 season.

Regrettably, I'm here to tell you that suggestion is false.

Now, to Irsay's credit, he did not say the injury was something that magically popped up recently. In fact, he left open the door to the notion that this injury did happen during the 2010 season. When asked by a reporter whether this injury was related to the neck surgery Peyton had in March of 2010, Irsay responded [emphasis mine]:

No, it was non-related. Really, it's just something where it started to be aggravated, um, you know, it could have been something, you know, that was there before. You know how these things are. Where you, you know, you feel a little something and then it kind of elevated to where the disc was up against the nerve, and there was real discomfort.

The Irsay quote that some are hung up on, where he supposedly said this injury happened 'recently' and denied it happened in 2010, is actually not what he said. Here is the reporter's question and Irsay's answer from yesterday in Indianapolis.

Was this [injury] something that bothered him during the season, or at the end of the season and he just waited to see how it would be in the offseason?

Irsay: No, I don't think so. I think it's something where, you know, guys get a lot of aches and pains and checking [it] out, it's nothing serious. And, you know, when this thing elevated to when that disc really came out and started bulging, it could have been over several weeks working out or some, you know, one sort of moment when it happened. I think, until recently, you know, when the pain really got in there and he was feeling it, there was a need to go forward [with surgery].

Now, for me, I don't see that as Irsay flat out denying the cause of this injury didn't happen during the 2010 season. I read him as equivocating. He's intentionally leaving things vague. He's not pointing to, or defining, the cause of the injury, which is what we really want to know.

Below, and after the jump, I have a timeline set-up of all the events that led up to yesterday's announcement about Peyton's injury. I sourced every important event, linking back to articles we wrote or that other credible sources published. Read it over, and be judge yourself on whether or not Peyton second neck injury happened during the 2010 season (here's a hint: It did!).

September 12th, 2010: Colts play the Texans Week One of the 2010, and lose 34-24. Peyton Manning is sacked twice and knocked down and around seemingly a gazillion times.

September 14th, 2010: I am contacted by a knowledgeable source, via email, informing me that Peyton has severe neck pain due to an injury and the Colts staff are aware and treating it. The source asks to be listed as anonymous for fear of reprisals. I spend the next three days following up with source on details.

September 16th, 2010: The Week Two injury report for Thursday is released. It makes no mention of Peyton Manning with any kind of neck injury.

September 19th, 2010: The Colts play the Giants at Lucas Oil Stadium. Peyton is seen with a sleeve over his left elbow. This was a similar sleeve he wore in 2010 while recovering from a March 2010 neck surgery. Manning threw the ball only 26 times in that game (his fewest attempts in one game all season, save the Jets playoff game, which was also 26) as Colts win 38-14. 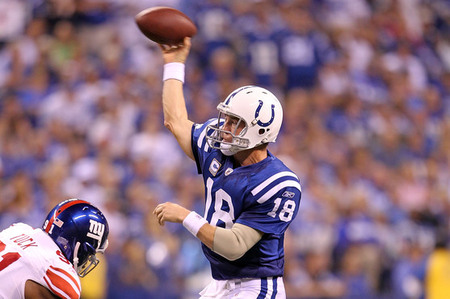 INDIANAPOLIS - SEPTEMBER 19:  Peyton Manning #18 of the Indianapolis Colts throws a pass during  the NFL game against the New York Giants  at Lucas Oil Stadium on September 19 2010 in Indianapolis Indiana.  (Photo by Andy Lyons/Getty Images)

October 15th, 2010: After watching five Colts games, ESPN TV analyst Ron Jaworski says that Peyton has 'not been real sharp,' and that perhaps time is catching up with him. Colts fans eviscerate Jaworski.

November 21st, 2010: Peyton Manning begins a stretch of three games that has him throwing three or more interceptions per game.

November 28th, 2010: Against the Chargers, Peyton is seen with the sleeve from Week Two now on his throwing arm, covering his right elbow. He tosses four picks against San Diego, including two returned for touchdowns. Colts blown out at home 36-14. 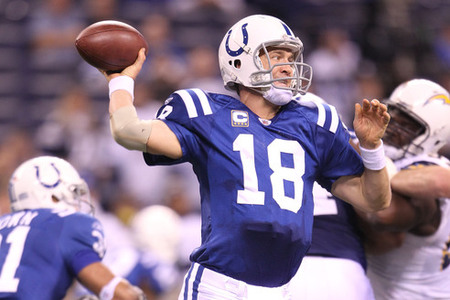 INDIANAPOLIS - NOVEMBER 28:  Peyton Manning #18 of the Indianapolis Colts throws a pass during the NFL game against the San Diego Chargers at Lucas Oil Stadium on November 28 2010 in Indianapolis Indiana.  The Chargers won 36-14.(Photo by Andy Lyons/Getty Images)

November 29th, 2010: Phil Wilson of the Indianapolis Star reports that Colts coach Jim Caldwell claims the sleeve on Peyton's right elbow was due to an abrasion he suffered falling to the ground.

December 1st, 2010: The first injury report for Week Thirteen makes no mention of any injury associated with Peyton Manning. Peyton has not spent one second on the injury list all season.

December 2nd, 2010: Peyton Manning admits to CBS Sports that he had a 'stinger' injury in his right shoulder and played through it against the Chargers in Week Twelve.

December 3rd, 2010: Final injury report for Week Thirteen. No mention of Peyton with any kind of injury despite him admitting to CBS he had one.

December 5th, 2010: Peyton throws four INTs against the Dallas Cowboys. Colts lose 38-35 at home. Fall to 6-6 on the season. Peyton plays the entire game with sleeve on his right elbow. That must be some 'abrasion', Coach Caldwell.

December 26th, 2011: Colts play the Raiders in Oakland, and the sleeve is now gone from Peyton's right elbow. 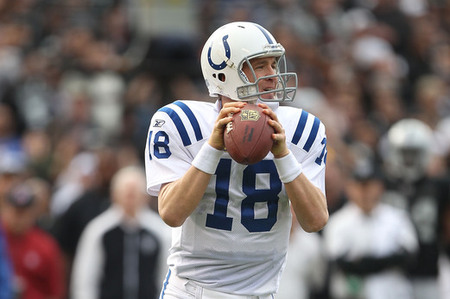 OAKLAND CA - DECEMBER 26:  Peyton Manning #18 of the Indianapolis Colts passes against the Oakland Raiders during an NFL game at Oakland-Alameda County Coliseum on December  26 2010 in Oakland California.  (Photo by Jed Jacobsohn/Getty Images)

January 8th, 2011: Colts are eliminated from the playoffs 17-16 by the NY Jets. Peyton finishes the season with 679 attempts, the most in one season for him in his entire thirteen year career. For all of the 2010 season, Peyton Manning is not listed on the injury report prior to a game.

May 24th, 2011: Mike Chappell of the Indianapolis Star reports that Peyton Manning has had surgery to repair 'a disc-related issue in his neck.' Chappell states that the injury that cause the 'disc-related issue' happened somewhat recently, but did not provide details. It's assumed the source for this causality explanation is Peyton himself, as he reported the surgery.

May 24th, 2011: After news broke regarding Peyton's neck surgery, Colts owner Jim Irsay was asked by reporters at the 2011 Spring owners meeting in Indianapolis if Peyton's injury occurred during the 2010 season. Irsay says that the injury built up over time, but just only started to cause Peyton discomfort.

Now, looking at that entire timeline, with all those events and facts placed neatly in front of you, if you still truly believe Peyton Manning's neck injury was caused 'recently,' no offense, but you are gullible and easily duped.

Sure, it is possible all these events in 2010 happened, and then by some odd coincidence, Peyton recently hurt himself by, perhaps, picking up his twins during feeding time. This caused 'discomfort' in some pre-existing injury that happened during a team workout. Thus, the need for surgery now. But, as my friend and colleague Jason Brewer of Bleeding Green Nation and SB Nation Philly stated, if all that is true, 'its one hell of a coincidence.'

Based on the evidence in the timeline, there's proof there Peyton had a neck injury during the 2010 season. He even admitted so himself, saying it was a 'shoulder stinger.' Thus, any suggestion that this injury was caused during a recent player workout is silliness, and highly unlikely.

More likely, based on the facts, Peyton got hurt during the 2010 campaign, and the Colts covered it up.

Obviously, Jim Irsay is not going to tell reporters at an owners meeting during a lockout that the injury initially happened Week One against the Texans, and that the Colts covered up the whole thing. He'd be admitting violating NFL rules, and he'd make himself, Bill Polian, and the Colts look like idiots. Thus, he seemingly answers the questions vaguely.

For many, I'm sure it is no surprise that the Colts have lied and misled fans and the NFL about this and (likely) many other injuries. Peyton himself has probably been complicit with it because, had they admitted the injury during the 2010 season, opponents would have targeted his shoulder or neck, looking to make the injury worse.

However, it is not for Peyton, Jim Irsay, Jim Caldwell, or the Polians to be self-righteous about the rules while, at the same time, skirting other rules to their benefit. The 2010 season had very specific rules about reporting player injuries, and by the looks of things, the Colts thumbed their noses at those rules.

Obviously, it was to the team's benefit to lie or cover-up the injury. At the end of the day, the NFL measures a team by wins and loses, not by how 'nice' or 'by-the-book' they are. But, what makes this situation particularly interesting is the Colts seem to enjoy lecturing people about 'integrity' and 'playing the right way.' Those lectures ring hollow if they are failing to live up to those expectations themselves.

Remember, integrity is doing 'the right thing' even if it is to your personal disadvantage.

Integrity is what you do when no one is watching; it's doing the right thing all the time, even when it may work to your disadvantage.

Former Colts coach Tony Dungy tweeted that quote seven days ago. When you think of it in context with the timeline above, it has a heightened significance.

When all is said and done, I don't think the NFL will fine the Colts for covering this up. It will get swept under the rug, forgotten and dismissed as nothing worth pursuing. But, if and when football returns, I'd appreciate it if people like Bill Polian, Jim Caldwell, and the like would please save us the lectures and speeches about how the Colts follow the rules and play 'the right way.' That simply isn't true, and it insults the intelligence of Colts fans everywhere who know better.

That said, I'm glad this whole thing now has some closure. Peyton had a successful surgery, and he should be ready for August... if we have football by then.