Peyton Manning's 'Football Cops' Gets Mixed Reviews From Some Fans

Share All sharing options for: Peyton Manning's 'Football Cops' Gets Mixed Reviews From Some Fans

By now, you all likely have seen, or at least heard about, the DIRECTV project Peyton Manning and Eli Manning are starring in titled Football Cops. The trailer is goofy, silly, comically violent, and yet another memorable on-camera endeavor that Peyton can hang his hat on.

Some of you here have gone so far as to call it 'EPIC,' 'Pure WIN!' and 'the greatest thing ever.'

But, unlike his Saturday night Live guest appearance in 2007, or his many hilarious Mastercard commercials, not all fans are laughing with the comedy in Football Cops.

Overall, I think the promo trailer has done it's job and peaked everyone's interest, and I think the demographic this show-project-whatever is aiming itself at clearly likes it; that demographic being the under 30, male market.

If you see comments from people who, in many ways, represent that market in the 'sports consumer' demographic, like the website Deadspin, the response is very positive:

we'd watch the sh_t out of Football Cops.

Indeed, if you read the comments section on YouTube, and check out the like-dislike meter, Football Cops has definitely got people interested. As of this post, the video has almost 530,000 views, and has a like-dislike ratio of 1,748-63.

But, I've noticed that with some female viewers, it's not as appealing. From Laura Calloway, our friend and writer at the Colts blog Coltzilla:

The guy who gets lit on fire at the end was the straw-breaking-the-camel's-back moment...at least for me.

These kinds of comments are interesting, and suggest that Peyton's departure from seemingly 'safe,' goofy commercials where he is wearing a fake mustache or buying 3D glasses with Justin Timberlake to campaigns which show him setting a man on fire might hurt his image a bit.

Now, obviously, the opinions of two women on Twitter don't represent the entire female gender. I'm sure many females enjoyed watching the trailer. I just found those two Tweets, from two women I have respect for, interesting. Like them, I was kind of taken aback by the trailer. I tweeted at the time:

The Peyton Eli 'Football Cops' thing is just weird. I don't know how to react to it.

I still don't know what to make of it. Part of the trailer makes me laugh. Other parts make me stare blankly, as if I'm looking at a mangled, bloody car wreck. I have no idea what the whole Asian-dude-mouthing-off-random-stuff sequence (in a language I'm not sure actually exists) is all about. I found that part borderline offensive. 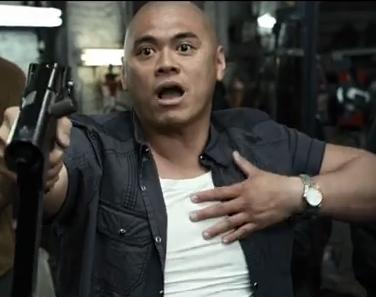 WTF is this guy saying?

But, perhaps that's the appeal. It's 'edgy' comedy, which is to say that it's for adults, not kids. Even though the humor is goofy, most family people (which is THE demographic the NFL and the Manning brothers play to) aren't going to let their kids which Peyton and Eli use special footballs to dose a drug dealer in flammable liquid and set him on fire.

That said, even though I don't know what to make of all this, if you were to ask me if I'd watch this 'show,' my answer would be a resounding yes. I'd watch the sh_t out of Football Cops.