So, another preseason game, another putrid performance by the Colts starters, in particular Curtis Painter. The Colts offense, comprised mostly of projected starters, drove for one first down in the first half.

Meanwhile, Indy's defense surrendered 16 first downs, 160 rushing yards, and 16 points by halftime. The halftime stats pretty much tell you all you need to know about the game: 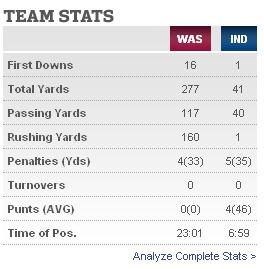 The positive is that Colts reserve quarterback Dan Orlovsky played very well tonight, especially considering he had awful protection and shotty craptastic receivers, Taj Smith in particular. Yeah, I know Orlovsky had a pick in the late fourth quarter, but that was Orlovsky trying to make a play.

Like with Tom Brandstater last year, it's obvious Orlovsky is better than Curtis Painter.

The immediate concern is that the play of Colts starters on offense and defense. Both looked terrible. Notable injury news involved Antoine Bethea, who left the game early with a hamstring.

Probably the most interesting part of the game was when Colts media mouthpiece Jeffrey Gorman interviewed tight end Dallas Clark about training camp. Clark said that camp and practices were going well, but, Clark stated in a tone implying annoyance:

'You'd like to see it carry over a little more in the games.'

Interesting how Dallas deviated from the normal 'blah, blah, blah' talking points for preseason. Gorman then asked if Dallas Clark 'liked' the football team. Don't ask me why Gorman asked him that. WTF is Dallas supposed to answer? 'Oh, I think we suck grape nuts, Jeffrey! We'll go 3-13 this year.'

It was a pretty stupid question. Par for the course for Gorman.