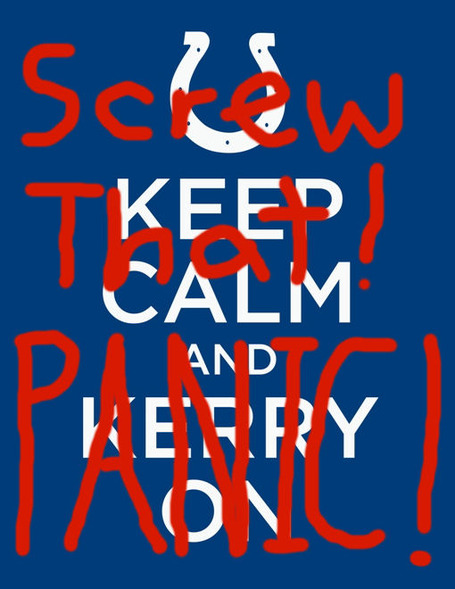 Well, that was pretty uninspiring.

Despite playing some solid run defense, holding the Browns to 3.1 yards a carry, and running the football well themselves, 109 yards at 4.2 a carry, the Colts were unable to keep Cleveland out of the endzone. Meanwhile, Kerry Collins was unable to get the Colts offense into the endzone despite several trips in Cleveland's redzone.

Oh, and the Colts let Colt McCoy carve up their secondary, completing 68% of his passes for 211 yards and a TD.

Colts defense managed just one sack on McCoy, and pass rush pressure was extremely inconsistent. In the modern era of the Colts, this game might have been one of the worst loses I've seen. This team reminded me of the teams pre-Peyton Manning. Heck, they're pre-Jim Harbaugh bad.

In a game this team absolutely had to win to stay relevant in the playoff discussion, the Colts laid an egg... at home... to the friggin Browns.

Kerry Collins was 22-32 for 211 yards and 1 TD, but like last week Collins' numbers were boosted when the game was, essentially, over. After a great punt return by Josh Cribbs late in the fourth quarter, Hillis took a carry left for 24 yards and a TD.

That punt return by Cribbs and the subsequent rushing TD by Hillis were, essentially, the ball game.

Congrats to Cleveland. They have a pretty good QB and team. We don't. Our team doesn't have a coach either. The 'Fire Caldwell Watch' is now officially on.