The Colts hiring Chuck Pagano seems to be viewed as a positive not just by fans but by current Colts players as well. When the rumors hit the web earlier this week that Pagano would get an interview with the Colts, Robert Mathis tweeteed:

Now that it's official that Pagano will become the new coach in Indy, that might increase the chances of the Colts re-signing Mathis this offseason.

Colts receiver Pierre Garcon also seems to be high on Pagano, using Facebook to express his feelings on the hiring while, at the same time, weighing in on the future of Peyton Manning: 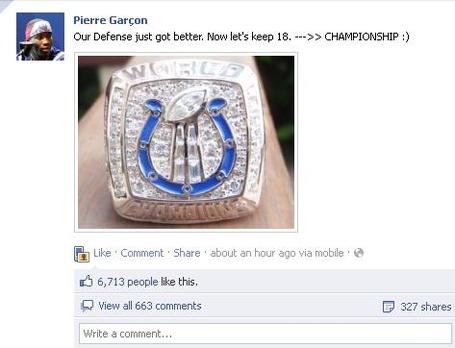 Garcon hit the point home by posting a picture of the team's 2006 Super Bowl ring... a ring he himself didn't earn because he was not on the Colts roster in 2006. But, whatever. We get his point.

Garcon may want the Colts to keep Manning, but Manning might not want to stay. In recent interviews with Bob Kravitz and Judy Battista of the NY Times, Peyton has described the Colts organization in less-than-flattering terms. It seems obvious that the P.R. power game has begun, and that Manning's tenure in Indianapolis is quickly drawing to a close.