Open Thread: Let's All Collecitvely RANT, RAVE, And Chat About The Site Redesign

Let's all, collectively, bitch and moan about all the stuff that changed on the site. When we're done with that, let's talk about all the good things that happened.

Share All sharing options for: Open Thread: Let's All Collecitvely RANT, RAVE, And Chat About The Site Redesign

So, we've had roughly a week to digest, take-in, deal with, rant, bitch, moan, praise, cheer, and jeer the new site re-design. By "we" I truly mean you (the readers) and us (the schmucks who write and edit this thing). Just like you, I've had to adjust pretty much on the fly. We've had to work with an entirely new site layout, editor tools, and story options all while juggling the news, opinions, and other general nonsense associated with the team we know and love: The Indianapolis Colts.

Oh sure. We received roughly 45 minutes of training videos which, nothing against the nice people who made them, were effectively useless. I do corporate training for a living outside writing here and other places. Training is best done when it is hand's on. Oftentimes, that isn't possible, especially when you are rolling out a new application. However, in the case of us writers and editors, they gave us roughly seven days to access a beta site so that we could fiddle around with all the gadgets and gizmos.

Not enough time, especially for those of us who are not full-time SB Nation employees (which I'm not... bet you didn't know that... and if you did here's a sucker).

That's my opinion. Maybe others in the network feel they had enough time to absorb the new platform. Those folks are probably really smart and design rockets and iPhones for a living while blogging is just a side gig. For me and others (who have all privately griped about the redesign), it wasn't enough time. That said, trying to train 300-plus writers on a new platform is no simple task. I hope the person who put that training plan together was well-paid, or, at least, got free beer. 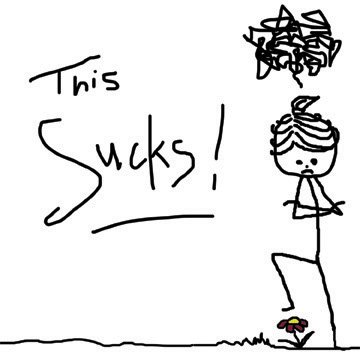 But, this isn't a bitch fest for me. In many ways, I think this redesign is great. In other ways, I think I'm more in-line with readers here.

In essence, SB Nation (and parent entity VOX Media) shot down and smashed what the site was (a blog) and transformed it into a "community site." It's reflected perfectly at the top of the site banner. Since I started this thing back in 2006, the tagline for the site always was "an Indianapolis Colts blog." That "a Indianapolis Colts community" stuff at the top of the current site banner? I didn't write that. That's SB Nation, and that's their right. However, what I think got a little lost in their re-design is a focus on the readers and reader-generated content. Like many of you, I liked the easy, quick layout of the blog chronicle. The most recent stuff was at the top, and all the other stuff flowed underneath.

It's a set-up that is very inviting, and it promotes discussion. Pro Football Talk has, essentially, maintained that exact same look and feel for over 10 years. I've always liked it. They still do pretty for themselves, by the way.

With the SB Nation United redesign, the emphasis is now less about stuff you (the reader) make and more about the stuff SB Nation can push to you. It's a shift in focus, and I believe it is by design. I mean, it's no coincidence that all the FanPosts and FanShots are pushed waaaaaaaaaaaaaaaaaaaaaaaaaaaay down the homepage, effectively making them a footnote on an already busy page. Those sections were yours to write, discuss, and gather in. I have signed up many a co-writer from those sections. Now, it seems SB Nation doesn't value them as much as they used to. I'm sure the designers and planners would argue otherwise, and maybe their argument is valid. However, when you knock something that far off the page, it sends a message (intentional or otherwise).

The new "United" layout does allow me to shift some things around, and that is great. Right now, I have the site layout at "Five Up." This allows me to keep five stories up on the main homepage at one time: One large panel to the left, four smaller panels to the right. I can also do a "Four Up" layout, which spreads a HUGE story across the top, with three small story panels underneath. There's also a "Three Up" (three panels, one large to the left, two smaller to the right) and a "Trypic" view.

From what I've seen, "Trypic" is the closet thing I can get to what the site used to look like. It places three stories in three columns at the top. Underneath it is old blog roll. In fact, underneath all these different views, the blog roll is still there. However, like the FanPosts and FanShots, it's pushed down. Also pushed down are our Archived Sections, Fan Confidence Poll, Twitter roll, and the article sections. 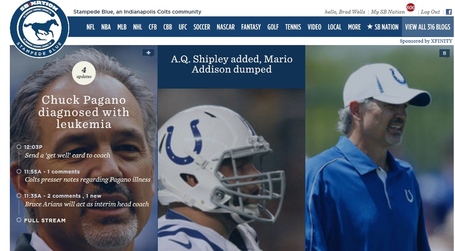 Basically, everything that allowed you to navigate, interact with, and feel connected to a unique community blog has been pushed down. That's unfortunate, but it is what it is. It's not like the stuff was taken away. That would REALLY suck. But, I know human nature. If it isn't easily accessible, people aren't going to use it. Hoosiers especially.

Now, this isn't to say that SB Nation United redesign sucks hard donkey balls. It doesn't. In many ways, it's just change. Why the change? That really hasn't been defined. We editors kind of get reasons that are a bit all over the place. Truthfully, there's been so much email chatter that I can't even remember what the initial reason was for the redesign. The catch phrase is that it "unites" us, but we were already "united" in the sense that we were under one network umbrella. However, it was also the uniqueness of each blog that made it special, worth reading. "Uniting" has the hint of "standardization," and standardization is kind of... well, dull. Again, that's my opinion.

That said, the redesign has many perks and cool knickknacks. It's fun to mess around with new layouts, paste cool hi-res pics on the front page, and add in funny promo headlines so that I'm not having to title every. stupid. article. with. search. engine. optimization. tags. Yes, they REALLY push us with that stuff, folks.

You all seen those titles. It's part of the business. A goofy part, but one I accept. Using promo tags to add simpler, more appealing article titles is great. 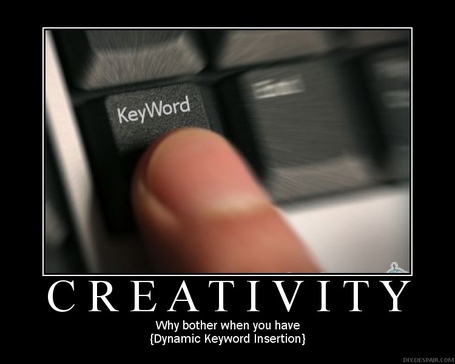 I also love the layout of the articles, and it's easier for me to snap in photos, videos, etc. The site is more in-line with what I used to work with at SB Nation Indiana.

The new format also always me and the other writers more freedom to experiment with tone, humor, and general goofiness. While we all love the Colts, in the grand scheme of things, sports is not that important. Chuck Pagano's cancer news should provide you with all the context you need when it comes to how high sports should be in your life in terms of priorities. With that sort of levity in mind, the new format allows us to write more long form pieces, articles with truly detailed analysis, and humor articles that make fun of people, places, and Jim Irsay's Twitter addiction.

Rest assured, I hear your complaints. I share many of them. Like you, there isn't much I can do. About the only thing I had design input on was the logo. I asked for a horse, a horseshoe, and the color blue. The nice, talented designers at VOX Media gave me what I wanted even though it kind of looks like the logo for the Chicago Cubs.

Going forward, me and and my tireless cadre of writing lackeys buddies will work to keep community-related features featured. Just because SB Nation pushed them down doesn't mean we think they suck. I ask you to PLEASE write articles in FanPosts. Some of the best stuff we've ever had on the site came from those posts. Please add links and other goodies in the FanShots. We'll do our best to make sure the good ones get seen by everyone on the site. We'll also publish and promote daily open threads, allowing you to go in and rant, bitch, moan, cry, laugh, cheer, praise, promote, and post funny pictures of cats.

Also, because this re-design was, for all of us, so sudden and such a BIG a change, I'm not going to be a Nazi when it comes to critical comments. As a rule, I've always asked that if you don't like something written, offer a reasoned, well-constructed counter. Simply responding with "That's dumb and you're an idiot" is trolling. Matt Grecco and I kind of don't like that. However, criticism for this re-design is warranted. Necessary, even. So, if you want to speak up and rant about things, go right ahead.

If you want to make me the focus of it all, blame all the bad stuff on me and call me a moose turd, go right ahead.

Just make is funny, if you would please. I need laughter in my life. You know, like this: 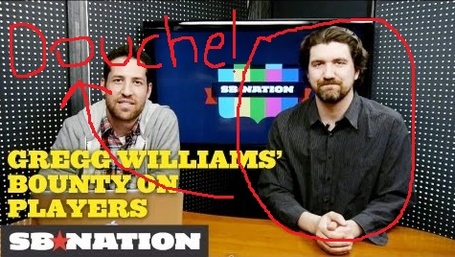 The bottom line here is I feel your pain. All this crazy change is a bit overwhelming. First it was firing the front office (January), then the head coach (February), then all the new hires (March), then the release of Peyton Manning (also March), then drafting Andrew Luck (April), then the blog gets thrown in a blender, re-made, and then released with little to no warning to the readers (September).

Kind of a nutty year.

If all of this still doesn't leave you satisfied, or if you're having issues with the site, then don't hesitate to email support [at] sbnation [dot] com.

If you have any other questions, toss them in the comments or hit me up on Twitter (@StampedeBlue) or send me an email (sbnationcolts [at] yahoo [dot] com).

It's also worth noting that several wonderful, very creative people put a lot of time and dedication into this re-design on many levels. Those people are (just to name a few) Trei Bundrett, Kevin Lockland, Jim Bankoff, Tyler Bleszinski, David Fucillo, David Halprin, Chris Mottram, and many, many more that I'm simply too lazy to mention. I'll also send love to Chad Mumm, Kyle Kramer, Michael Bean, and the lovely folks at SBN Studios. They do great video work, and video is a big part of SB Nation now.

As always, thanks for reading, watching, and interacting. We will work through this change together, and (hopefully) enjoy its fruits. Comment below. Chat away.

-Brad (aka, still BigBlueShoe... still a d*ckhead with a heart of gold)