Thank God we get to play this team this season. What a mess... Hopefully Andrew Luck isn't afraid of clowns, because that's honestly the only way I see this team losing to the S-U-C-K, JETS, JETS, JETS. 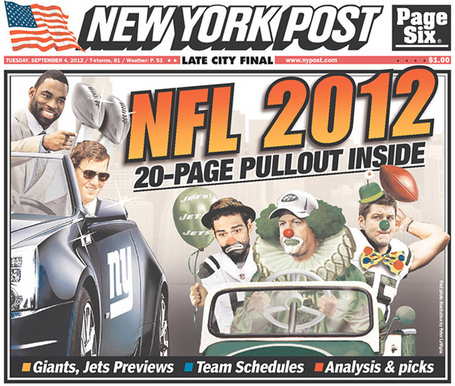 Guess where I got this from (nypost.com)

Honestly I have no idea what to expect from the offense besides bad and underachieving. Mark Sanchez was billed as a franchise QB after having 1 good season at USC. Whoops. Tim Tebow is everyone's messiah besides not being able hit his receivers in the numbers if they are more than 15 yards away from them. Santonio Holmes has done nothing but drop passes since leaving up in smoke from Pittsburgh (He's gotten 400 more yards in his last 3 seasons than he did his last season in Pittsburgh) and now he's out for the season with a horrible sparkly unicorn Lisa Frank injury. Shonn Greene has been bad, fumbley, and plodding. For the Donald Brown haters out there (myself included) just watch one game of Shonn Greene and be happy. Well maybe not happy but delighted that we aren't the only team with a bad RB. Off to the bigtop to break down each position!

What a match made in hell. You've got a terrible QB, so why not get the most polarizing bad QB and the worst QB to ever win a playoff game? If Tebow is in the game you better have 9 guys in the box because he has thrown the ball two times and run the ball 14 times this season. Sanchez is terrible, he's completing 48% of his passes for 6.6 yards/attempt. He's got 6 TDs and 6 INT in 159 attempts. Please Rex, please put either of these slobs under center and let them throw the ball 40 times against us.

Ok first off, you've got 2 guys that don't have real names and a third who sounds like he should be a member of N'Sync. Second of all you've got Fumbles, "Who?" and Falls-Down-On-First-Contact running the ball. Of the three Powell is the only one who could give the Colts problems. But he's only averaging 3.9 ypc. If they average over 5 ypc in this game, I think it shows a big problem.

Oh boy... Did you know these guys? Are you a Jets fan? If you answered yes to both I think you're lying. I know Chaz Schilens from his Oakland days, you know his 72 receptions and 902 yards. Kerley was apparently a Jet last year too. And he came from TCU, did you know that? I know Stephen Hill from the draft (I kind of wanted the Colts to draft him) and he is big and fast. He could be dangerous if he gets behind the DBs, but then again look at who's throwing him the ball. Jeff Cumberland has caught 4 times as many balls this year as he had previously in his career. Dustin Keller is questionable for this weeks game, if he does play I think he's still not much of a threat. It's been so bad on this corps that they ran Cromartie out there for a few plays.

The left side of this line SHOULD be pretty good, and really they're not bad, but with the high draft picks the've used on this line, they should be better. I don't really know Moore or Howard. I guess that's good since I don't know them to be overrated... On PFF's Moore was ranked #1 among guards between 2008 and 2010. I didn't notice the line being terrible Monday night, but I was really focused on Schaub and him being my fantasy quarterback. I mean J.J. Watt did eat their lunch a few times, but who has had their lunch eaten by the Milkman.

The Big Top that tries to contain the circus 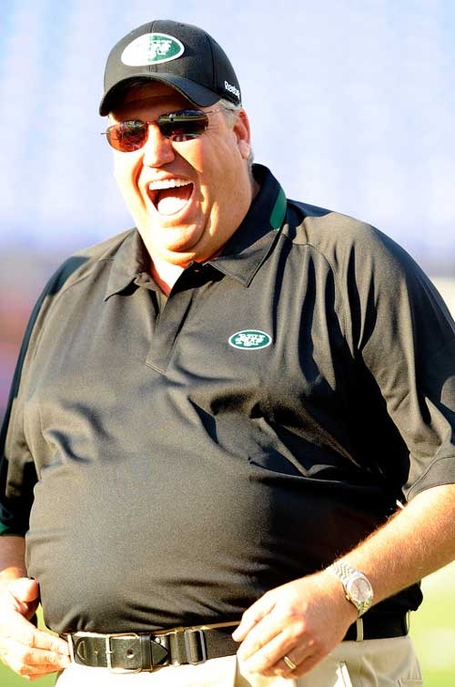 WHOOO HOOO OH BOY! THIS DEFENSE IS NOT MY BEST EFFORT. GOOD THING NACHO AND JESUS ARE HERE! OH THEY'RE TERRIBLE TOO! WHOOOO BOY I'M GOING TO LOSE MY JOB!!!

Ok, enough of the fake Rex Ryan. This defense is terrible. According to Matt's Winning Stats they are the 22nd adjusted defense. And yeah, we're only 7 spots better than them, but really, their run defense couldn't stop Reggie Bush and Daniel Thomas and gave up 169 yards to C.J. Spiller. Teams have run 176 times (most in the league) for 860 yards (31st in the league) which is a 4.9 ypc (29th in the league). Its a shame Donald Brown is going to miss this game but Vick Ballard and Delonne Carter could both rack up a solid 60-70 yards. There is NO REASON we should run the ball less than 25 times. Actually there is no reason we should throw the ball more than 35 times...

The secondary is missing Revis Island, but recently you have been able to get a work visa pretty easily if you were a decent QB-WR combo. Antonio Cromartie is a solid solid #2 Corner and I think we all remember the one game he had against us. Luckily the Jets don't have a Darren Sproles to combine with him. LaRon Landry is a solid safety so long as he can stay healthy and Yeremiah Bell is another decent safety. Replacing Revis is Kyle Wilson the first round draft pick of 2010. He's a fine nickle back but I don't think he's exactly the killer the Jets thought they were drafting. Throwing on this team isn't recommended. Run Bruce. Run the ball.

Keys to the game

1. Avoiding a let down. The players are riding pretty high right now after beating a team who had 2 losses all of last year. This is a winnable game even on the road with a rookie QB, a hurt RB and our best defensive player out for 2 weeks.

2. Run the ball. I don't care that we're starting a rookie RB. I don't care that Rex Ryan defenses usually rank in the top 10 in run stopping. This run defense couldn't stop either of my dead grandmothers. RUN. THE. BALL. Control the clock. Get into 3rd and Short situations and let Luck fool them with some play action. If we have under 120 rushing yards at the end of the game it better be because we have 3.0 YPC and not because we ran the ball fewer than 30 times.

3. Don't get Tebow'd. It happened to the Bears last year when Forte and Cutler were out. It happened to the Steelers in the playoffs. Don't let it happen to us. 8 guys in the box to stop the Tebow option. Don't let a WR get behind Bethea. If Tebow takes 8 snaps, odds are 9 of them will be runs. Also if we sack Tebow (in the rare chance he actually throws the ball) please don't Tebow over him either. The "Discount Double Check" last week was cool, Tebowing has been done.