If the 2012 season has taught us nothing about the new regime in Indy, it has shown us that they are not afraid to change things up. Stampede Blue's Eric Miller noticed this while watching the Colts victory over the Packers last week decided to use the new All-22 feature from the NFL's Game Rewind product to get more information.

Share All sharing options for: Breaking Down The 2012 Indianapolis Colts 'Hybrid' 3-4 Defense

I, like most of you I'm sure, was dumbstruck at half-time of Sunday's game between the Indianapolis Colts and the Green Bay Packers. On pace for a 42 - 6 final score something had to change. The Colts were not getting any pressure and the Packers looked content to ride the wave to another W.

Then came the second half. Now, the old leadership of the Colts would have attributed the second half turn around to people doing "their jobs" better and "working harder." All of that is true, but it's not the whole story.

If this season has taught us nothing about the new regime in Indy, it has shown us that they are not afraid to change things up. I noticed it while watching the game live, so I decided to use the new All-22 feature from the NFL's Game Rewind product to take a look.

First, I looked at a few simple things. How many down linemen did we have? How many people were in a blitz position? How many people rushed the QB? What coverage where we showing (just a simple observation like press or off)?

Here's a chart of what I saw (what good is a breakdown without a chart?).

First big thing. The Colts still have 4 linemen down 55 out of 64 defensive snaps. That comes from trying to keep Freeney comfortable. Is it working? Jury's still out. We haven't gotten to see him for a couple weeks.

Second, look at the change in people near the line and people sent after the QB in half two. We started showing more pressure and sending more creative pressure. I think this will be a continuing trend. I've got a specifc play that I'll show you in a bit.

Last point on the chart. Look at the pressed DBs. 19 out of 32 plays in the first half (nearly 60%) of the corners pressed against the Packers receivers. Second half, 10 of 32 plays (31%). Big shift. That's the coaching staff sending a trend and adjusting to it.

On to a couple of plays to illustrate my point:

Picture 1 - The Colts show up in a simple alignment here. No question to me that it's man across the board. Especially after Randall Cobb goes in motion. 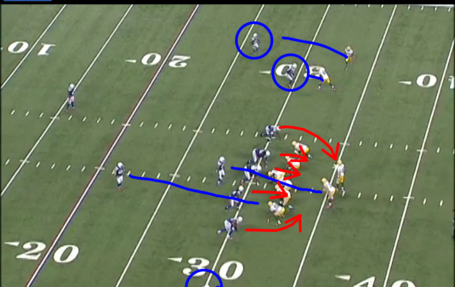 Picture 2 - It's as simple as Madden. Man coverage on a quick receiver running a slant = no chance for the defense. Wes Welker has made millions doing this. Notice the terrible angle Antoine Bethea takes to try and make a play. Easy score because of the simple read we gave Rogers. 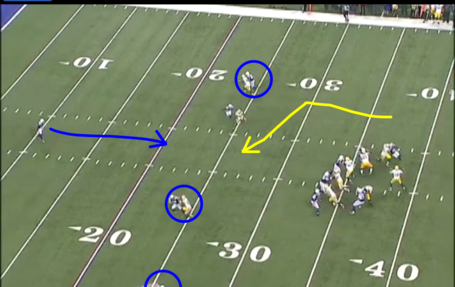 Picture 3 - Here's a look from quarterback Aaron Roger perspective. Notice the max protect line call in front of that give Rogers a clean pocket and a wide open throwing lane. Impossible for a defense to stop. 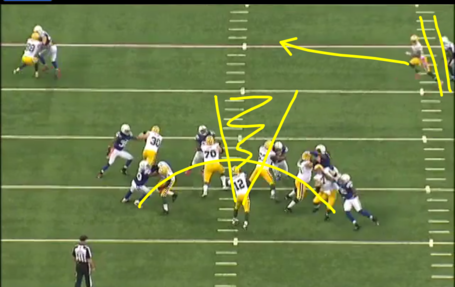 This was the case throughout the first half. The receivers beat the press coverage and the protection of the Packers stopped our pass rush. They knew right where the pressure was coming from and how to neutralize it.

Let's look at a play from the second half as an example of how things changed.

1st Picture - Notice the alignment. 6 guys showing blitz. Corners back. Granted it's on 3rd and 15, but still. 3 guys appear to be coming from each side. I diagrammed what the defense will do. Check the next picture for what Rodgers would have seen. 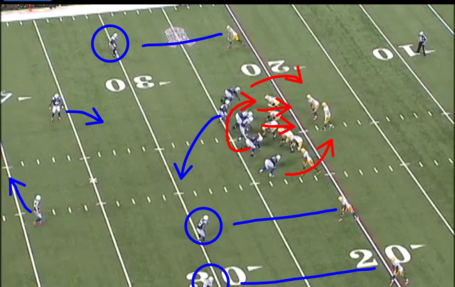 Picture 2 - This one from behind the line. Rogers feels comfortable seeing a hat on a hat if all 6 Colts come on a blitz. What ends up happening when the LB goes to cover the TE is that the Packers ended up with a blocker doing nothing. 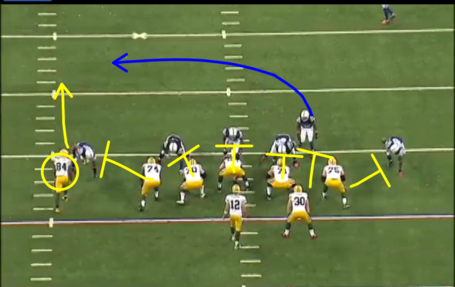 Picture 3 - Still behind the line. Look at Rogers head. He is looking right at the TE, who he thought might be uncovered. He sees the LB coming across for coverage and has to hold the ball or risk a pick. Also check out the loop run on the line. Early in the game, Rogers hurt the Colts by breaking some contain on the line. This time, two Colts linemen engage 3 Packers linemen and allow the end to loop and fill the escape route. 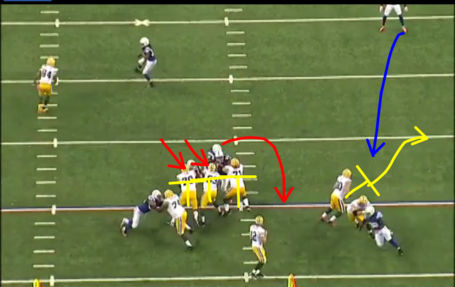 Robert Mathis flushes Rogers up in the pocket right into the bull-rush of Dwight Freeney. The defense confused Rogers by showing an even number of blitzers on each side and simple coverage that ended up being not simple.

It is easy, and correct, to say that the defense "just played better" in the second half. They were more disciplined and it shows in the things they were able to do.

I would expect this to continue throughout the season. I have not looked at what we did the rest of the year as far as disguising coverage and blitzes. I do think this is a clue into what this defense can be as they continue become more comfortable playing together.

I have to say, love having more defensive interest to look at and break down. This is not Tony Dungy's Tampa-2 anymore. I can't wait to see it evolve throughout the year.