To say the Colts defense has been erratic this year is like saying there might be a bit of doping in bicycling. Stampede Blue's Eric Miller looks at NFL.com's All-22 tape and provides his observations on why the defense has been so shaky.

Share All sharing options for: NFL.com All-22 Breakdown: Colts Defensive Trends And The Pat Angerer Effect

The Week 7 Jets game was hard to watch. Even worse the second time around. The adage in the NFL goes: "You'll never win if you score FGs and allow TDs to your opponents." Never more what was on display in that game. Yes, the numbers look bad. Yes, the performance was horrible. Is there anything we learned from the game film? Most Assuredly!

First, a look at the alignments we used during the game. In our breakdown of the Colts dramatic victory over the Packers in Week 5, we were able to see the defensive staff make adjustments at half time that changed the game.

Against the Jets, the front adjustments were:

The problems with the Jets game were two fold:

How about an few examples of each!

First, check out the alignment. Tim Tebow is at the QB position while Mark Sanchez is still on the field, split out wide to the far side of the field. With Tebow in, the Colts defense is obviously on alert for QB keep and run. Freeney has his hand down and, at the snap, jumps inside. The problem is, his responsibility is outside contain. The play is well covered to the other side by both inside LBs jumping inside to contain Tebow. 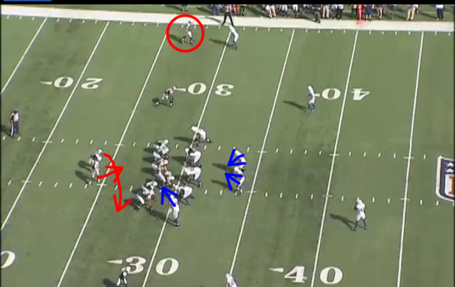 As the play develops, Sanchez does nothing, but keeps a defender over with him. That means the Jets offense has a man advantage for blocking. Tebow reads Freeney's jump down inside and gives the ball to Green. If Freeney had taken his contain responsibility, he would have been in position to make the play. 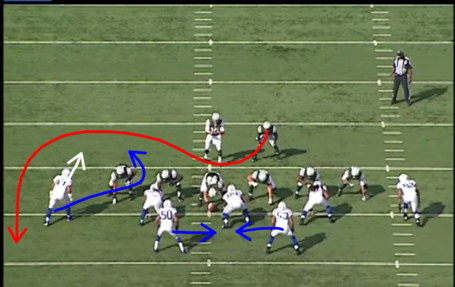 Now Greene has the corner with blockers in front of him. The play design got the Jets an advantage, and one missed responsibility (Freeney) let the play blow wide open. 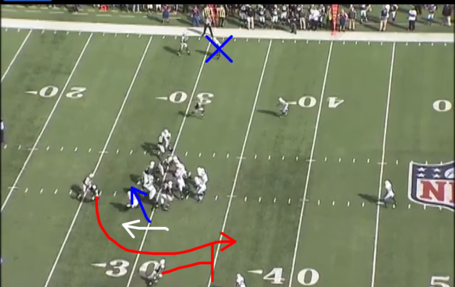 Same drive as the previous example. It shows how well some plays went for us. Again, a fairly standard alignment for this defense. 4 down and nickel personnel in the backfield. First thing I see is how "norma"l this looks. Freeman is not pressed up, showing blitz. With the silent count used by the Jets, Freeman is able to time his blitz just right and change the play. 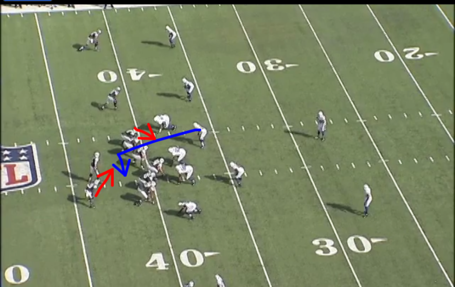 Here's the Jets' scheme for the play. Its not great. They are counting on the TE coming across to take out Freeman on a trap block. With Freeman's timing being so good on the play, there is no contest. 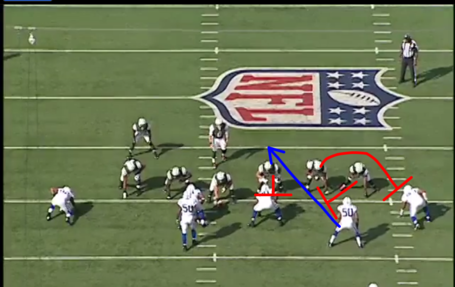 Final Picture. Freeman has beaten his block and is ready to blow up the play. Also notice Hughes has set the outside edge and does not allow a cutback lane around the outside. Good design and good execution.

THIS is what the new defense should look like.

This is an example of poor design by the Colts coaches AND the timing being not quite right.

This time they staff appears to be selling out to stop the run. 9 players in the box trying to stop the run. My problem with design is that the Jets have an even alignment, but the Colts have overloaded the far side of the field. Again, the play design relies on the OLB to set the edge. If that doesn't happen, there is no help to stop a big gain. 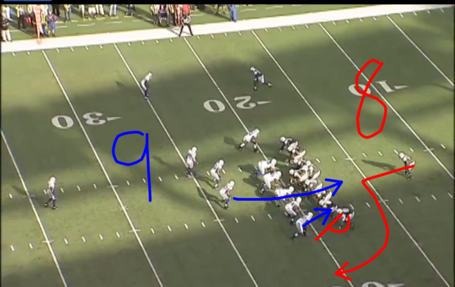 Jerry Hughes gets taken out of the play by a perfect down block from the Jets TE. the only people left to make a play are the 2 LBs and Safety that were positioned on the other side of the field. 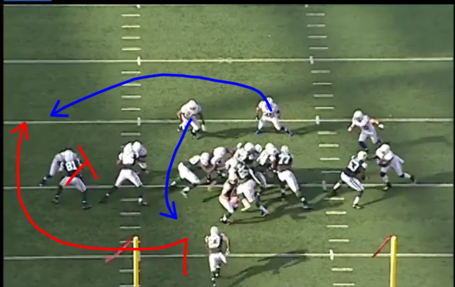 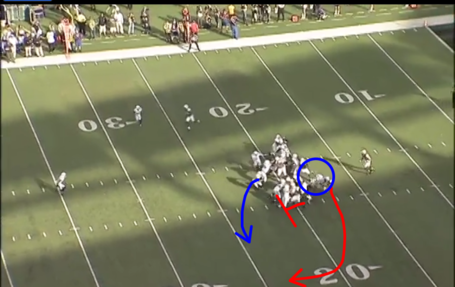 All in all, this was a game to forget! Tough to watch and tough to watch again and breakdown. Sometimes, the Colts defense looked like a team that really wanted to win. Other times, they forgot assignments and got taken out of plays too easily.

Pat looked good against Cleveland. You can really tell he was excited to be back on the field. His energy was a huge lift for the defense. Angerer played 20 of 60 defensive snaps. I'm sure that was planned.

The biggest surprise for me was the ability and timing Pat showed while blitzing. This is something he hasn't gotten to do often here in his career. His runs were well timed and right in line with the defensive scheme of the play. He does need to watch lowing his head as he reaches the QB. He was close to a "driving the QB into the ground" penalty twice in this game. Careful!

When it came to comparing Angerer with Kavell Conner, the All-22 tape made it easy for me. Cleveland ran the same play twice during the game with the Colts in the same defensive ailment each time. The first time, Conner was in at ILB. The second, it was Angerer.

This was the Browns first offensive play of the game. The first picture shows the defensive coverage and offensive play call. Fairly simple on both fronts. 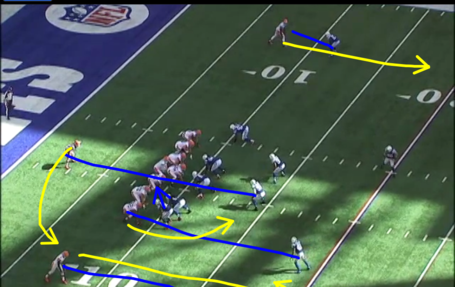 Colts are in a Man-Under 1 concept. Zibikowski has deep centerfield with the LBs and CBs in man coverage underneath that. Jerry Hughes is standing up and will rush the passer while Freeney has his hand down on the opposite side.

The Browns run a deep hitch (15 yards) on the near side and a go on the far side. The near TE crosses the middle of the field while the opposite TE stays in to help on Freeney. The RB wheels out of the backfield. The play is designed to either confuse the man coverage between the safety and the linebacker, or have a hitch open in the case of zone. 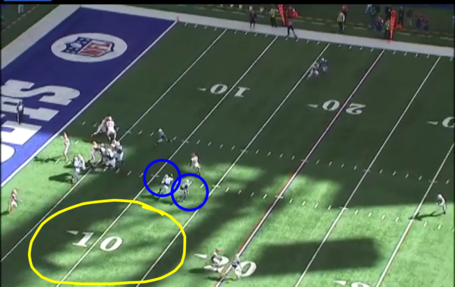 The play design works here because Kavell Conner and Antoine Bethea both follow the TE underneath. With the corner cleared out by the deep hitch and Zibikowski held by the deep routes, the RB has 10-20 yards between himself and nearest defender. 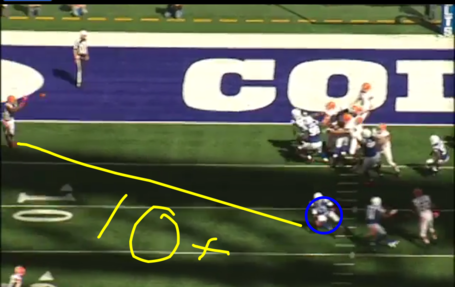 Here's the last shot when you can see Conner realize that he has blown his assignment on the play. Easy completion for young rookie Weeden and 9 yards on the first play from scrimmage.

Well, would you look at this. Same alignment, same defensive scheme, same play. Hell, it's almost the same spot on the field. 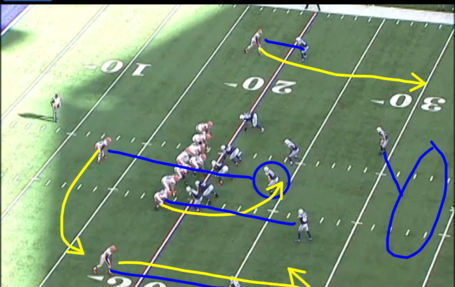 This time Angerer stays with his assignment on the play and is in the flat to cover the back before the ball is delivered. Weeden actually reads this and goes to the second option on the play. You can see the coverage on the play is quite good all around. 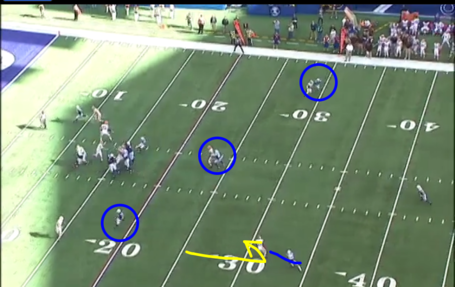 It takes a very good throw and a great catch from Greg Little to gain the yards on that one. Check out the last picture. The defensive line also did good work to clog the throwing lanes on the play. No one was going to get to the QB this time, but we got people in the way. 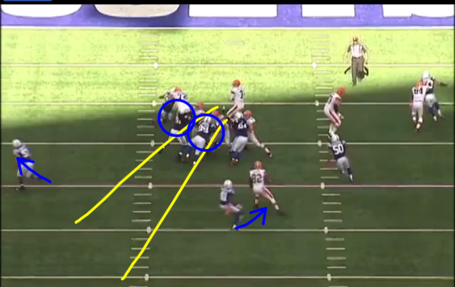 While the play still turned into a first down for Cleveland, it was much more work. Weeden had to make a top-notch throw, with people in his throwing lane. All players in the NFL are professionals. We cannot win if we let things be easy for people. Blowing coverages on the first play on the field is unacceptable in this league. It will lead to losses.

Angerer showed me on Sunday that he is back. His burst was there. His timing was on. His tackling was solid. His motor was as high as ever. While I'm sure the play discussed above is not the only reason for giving Pat more snaps, it does illustrate the fact that Angerer was better on Sunday.

In the end, that's what matters.

Follow Eric Miller's weekly All-22 write-ups about the Colts here at Stampede Blue. An All-22 breakdown of the Colts offense is available here.