Let's Write A Love Letter To Bruce Arians, Shall We?

Bruce Arians did a helluva job coaching the Colts during their 30-27 comeback win over the Packers. Let's rub that in the face of the Steelers and the Rooney Family.

Share All sharing options for: Let's Write A Love Letter To Bruce Arians, Shall We?

This was me tweeting early in the Packers v. Colts game on Sunday.

Dear Bruce: all scoring plays are reviewed. You don't need to challenge you moron.

This stirring collection of prose was after Colts interim head coach Bruce Arians tossed a challenge flag on the field following Green Bay's second touchdown in the first half, a six yard score from Aaron Rodgers to James Jones. All scoring plays are automatically reviewed from the replay booth upstairs, and the red hanky Arians flipped out there ended up being an unsportsmanlike penalty, 15 yards assessed after the kickoff. By the way, the Jones touchdown was upheld.

On the surface, the Arians challenge smacked of unpreparedness, as if he was in over his head with this interim coach gig that had been thrust upon him.

Equally annoying were some of the interim coach's calls on offense. Arians - who still doubles as the team's offensive coordinator - dialed up a quarterback sneak on 4th-and-one on the Packers 44 yard line late in the first quarter. Understand, I liked the call to go for it in that situation, but a sneak? Behind reserve center A.Q. Shipley and reserve-tackle-who-should-not-be-playing-guard Jeff Linkebach? Dumb. The Packers took possession of the ball and drove it down the field for a touchdown.

It's also worth noting that I watched the game at SB Nation's production office in the presence of Steelers fans, who gleefully taunted me with insults about how inept Arians was in Pittsburgh when he coordinated their offense from 2007-2011. Ah yes, Pittsburgh fans, or, as I like to call them, irrational snobs who conveniently forget Arians is probably the biggest reason why they won Super Bowl XLIII and very nearly won Super Bowl XLV. Without Arians, Ben Roethlisberger is more in-line with Trent Dilfer than Peyton Manning. Without Arians, Hines Ward probably doesn't even sniff the Hall of Fame. Right now, he has a legitimate shot.

To draw a contrast between my bellyaching and that of Steelers fans, I often get frustrated with the current Colts offensive play-caller because I know he's good at his job and I have high expectations. Steelers fans are just looking for excuses to hate Arians in a pathetic attempt to justify why their team's owner ran him out of town back in March of the this year.

It really is amazing how far Arians has come in seven months. Everyone remember when he "retired" after Pittsburgh's collapse in the playoffs last season against the Tim Tebow-led Denver Broncos? Funny how it's Arians who "retires" and not Steelers defensive coordinator Dick Lebeau, the supposed defensive "genius" who was outcoached by Denver's O.C. Mike McCoy, and who nearly blew Super Bowl XLIII when his defense allowed Larry Fitzgerald to run 64 yards to pay dirt with 2:37 left in the game.

The "retired" nonsense was the Rooney family pushing Arians out of the Steelers organization, despite the reported protests from the head coach, Mike Tomlin. Anyone who says the Rooneys don't meddle in the affairs of their organization is either carrying water for them or a complete idiot. Arians was pushed out despite being one of Pittsburgh's all-time greatest assistant coaches.

Then, not long into "retirement," Arians' old buddy Chuck Pagano called. Pagano asked him if he wanted to come to Indianapolis and coach the offense. Arians said yes, and as we noted at the time, it was a hire that got all of us at Stampede Blue excited! Indianapolis had a real play-caller now. Someone who was going to open things up and make the Colts exciting to watch again. 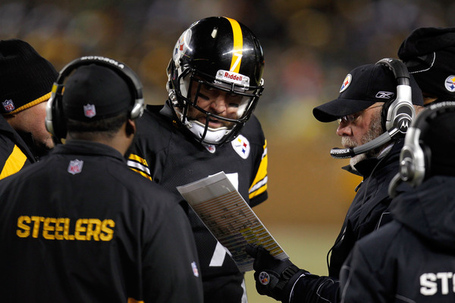 It's possible that no one was more shocked about the news regarding Chuck Pagano's leukemia than Arians, who is himself a cancer survivor. No one even knew Arians had cancer until he revealed it at the press conference announcing Pagano's leave of absence for medical reasons. That his friend is fighting with leukemia is one thing. Having to, effectively, replace that friend as head coach seven months after getting fired in Pittsburgh is something else. When Arians had to address the media for the first time as interim coach, he said:

This is not an easy day for all of us. Not the way I ever dreamed of addressing a group like this.

On Sunday, after I spent much of the first half cursing Arians' name from my couch, I concluded my early afternoon by cheering and dancing around like a lunatic in the SB Nation office as the Colts went on to beat the Packers after Mason Crosby Vanderjagted a 51-yard field attempt to tie the game wide left..

Much of the reason for the Colts improbable victory? Bruce Arians.

Yes, yes, yes. Andrew Luck and Reggie Wayne will get all the credit. They both had days that will be remembered long after they retire from football. However, without Arians' leadership and playcalling, those two players don't have career days. It's not like this fact is lost to either of them. After Colts owner Jim Irsay gave an impassioned speech to the team in the locker room following the game, vowing to deliver the game ball to Chuck Pagano in his hospital room later that evening, Reggie Wayne held up a different game ball. He then announced to the cheers of the team:

As much as Bruce Arians' coaching (or perceived lack thereof) probably contributed to the team falling behind 21-3, he deserves a great deal of credit for rallying the club at halftime. Per Arians, the message was simple: "No panic." It's a phrase we fans have heard before from the likes of Tony Dungy, back when he coached this team. The true test of a coach is not whether he has the right message. It's whether he can get the team to listen to it.

As Luck told the media after the game when asked about what happened at halftime:

We're not going to change anything. We've just got to do better. Do what B.A. [Bruce Arians] is calling better. I think guys took that to heart.

Message received. Score one for Arians. 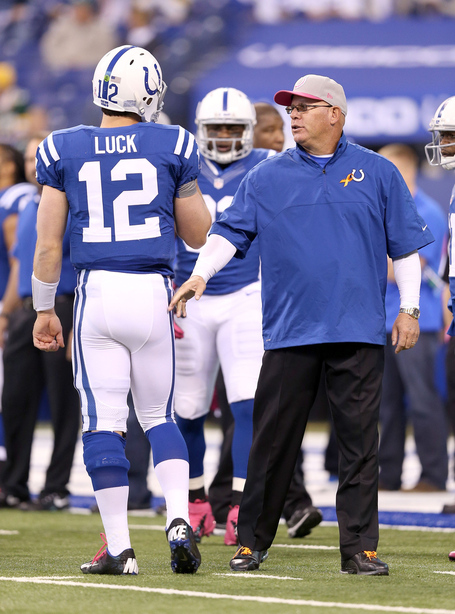 Heck, even the challenge flag fiasco might have been a calculated judgement on Arians' part. When he spoke to the media yesterday, his game ball resting triumphantly on the podium, Arians addressed the red flag incident, unsolicited:

I knew I couldn't challenge the call, just in case anybody wanted to know. I threw it on purpose. I wanted to get somebody's attention out there because I didn't think it was going the right way out there.

The comment drew laughter from the media, as it was clear the attention Arians' sought was from the game's officials.

That ball came out. Whether that replay official knew it was a touchdown or not, [the Packers kicker] was going to kick it in the endzone and we were going to get it on the 20 anyway. So, we didn't lose anything, except the unsportsmanlike conduct, but, we started on the 20 anyway. I knew it was unchallengeable play. Don't be writing that I didn't know what the heck I was doing. Everybody said, You can't challenge it! I'm throwing it anyway. And they were all trying to be nice. I just wanted to get my point across.

When a follow-up question asked if the point was meant for the team, Arians answered:

No. To the gentlemen calling the game.

Arians then followed up with this comment; a wry, mischievous grin on his face:

And they are gentleman.

Well, sh*t coach. Thanks for making me feel like a schmuck for calling you out on throwing the flag!

As we've noted since he began his tenure as Colts offensive coordinator, it's hard not to like Bruce Arians. I don't know what he is like behind closed doors, but players seem to have a strong love and loyalty towards him. He also has a no-nonsense attitude and demands absolute accountability:

However, underneath that tough veneer is a man who genuinely cares for the players who play for him and the coaches he coaches with, in particular Pagano.

When asked immediately following the Colts victory if he had spoken to or texted Pagano, Arians answered:

No, not yet. I can't wait to get in there, get on the phone, and tell him that I love him.

By the way, thank you to the Rooney Family for running Arians out of Pittsburgh. Todd Haley is now your O.C.