Top Five Greatest Indianapolis Colts Comebacks: No, This Is NOT A Friggin Slideshow

In this list we note the Top Five Greatest Comeback Victories in the history of the Indianapolis Colts.

Share All sharing options for: Top Five Greatest Indianapolis Colts Comebacks: No, This Is NOT A Friggin Slideshow

It's tricky to place Sunday miraculous comeback victory into context for the simple reason that zany comeback wins are somewhat common in Indianapolis Colts history. I'm not just talking about Peyton Manning's tenure. Even before Peyton, the Cardiac Colts of the mid-1990s - quarterbacked by Andrew Luck's former college coach, Jim Harbaugh - made a habit of giving fans more than their money's worth when it came to fourth quarter sports heroics.

It's also worth noting that for each era of the Colts, it has been a comeback victory that has sparked that era. In this list, we note the Top Five Comeback Victories for the Indianapolis Colts.

Note: Is is not a friggin' slideshow. 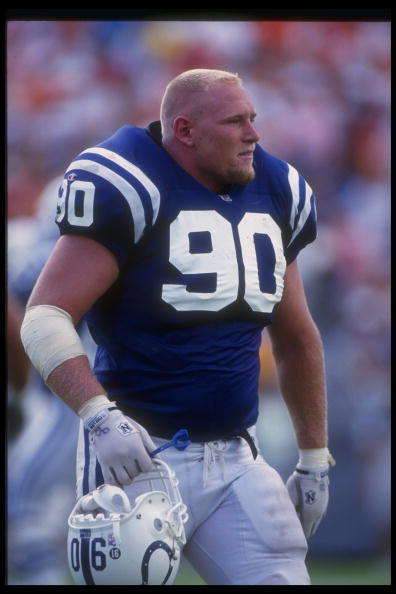 We're quickly approaching the 20th anniversary of this game, and it is only now that I realize HOLY SH*T I WAS 16 WHEN I WATCHED THIS! For those of you who are too young to remember, yes, the Colts did exist prior to Peyton Manning. They played games, and even won a few (very few). One game that always sticks out in my memory of that time was Week 8 of '92.

That season was the first for head coach Ted Marchibroda in Indianapolis. Teddy was the head man in Baltimore back in the 1970s, and after a strong stint in Buffalo as their offensive coordinator in the early 90s, he got offered the head coaching gig in Indy following a disastrous 1-15 season under Ron Meyer (who was fired mid-season) and interim coach Rick Venturi.

The Colts entered Week 8 with a 3-3 record. Things looked improved in Indianapolis, but the fanbase still didn't know what kind of team this was going to be. Miami and Dan Marino were the No. 1 nemesis for the Colts back then. The Dolphins in '92 were considered Super Bowl caliber, and entering Week 8 they were undefeated at 6-0. The match-up with them that week was akin to modern day Alabama taking on Indiana State. However, against the odds, the Colts rallied after being down 14-7 in the third quarter. Miami took the lead 20-17 in the fourth quarter on a Marino touchdown pass to Tony Martin. The Colts responded with a 10-play, 79 yard drive of their own, culminating in a one-yard touchdown run by then-quarterback Jeff George.

However, enough time was left on the clock, and Marino drove the Dolphins into the Colts redzone. Then, with Dolphins facing fourth-and-goal at the Colts' seven-yard line, Marino threw a pass that was batted and intercepted by 290 lbs Colts defensive end Steve Emtman [pictured]. Emtman, No. 1 overall pick in the '92 NFL Draft, then took the INT and ran it back 90 yards for a touchdown!

"I just got my hands up. It hit my hands and stuck," Emtman said. "Next thing I knew, I was running."

For those of you watched last night's Monday Night Football game and the clinic Texans defensive end J.J. Watt put on the NY Jets, Watt is today what Emtman was back in '92. It's unfortunate the former No. 1 overall pick out of Washington's career was cut short due to knee injuries.

I will always remember Emtman running with the ball, down the sideline, and the announcers on the radio (this was pre-Bob Lamey) screaming, "HE'S GONNA SCORE! HE'S GONNA SCORE!!!"

One of the few great memories of that period in Colts history.

2006 AFC Championship Game Between The Colts And Patriots, 38-34 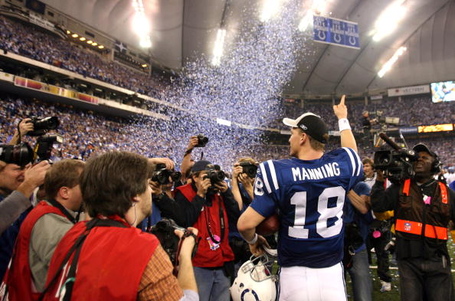 Many people have this game as No. 1 on their Colts comeback list. Yes, it is an important game. It's probably the signature win of the Colts franchise while in Indianapolis, more so than even Super Bowl XLI over the Chicago Bears. I have it at No. 4 because, while a tremendous victory, it ranks lower in terms of comeback significance when compared to the victories listed ahead of it.

We all know the story of this game. The Patriots used to own the Colts at this time, especially in the playoffs. New England built up a 21-3 lead only to choke it away in the third quarter when quarterback Peyton Manning got red hot. The score was 34-31 Pats before Peyton and company went on "The Drive" that staked the New England specter. Joseph Addai finished the drive with a three-yard touchdown run on a play that featured center Jeff Saturday absolutely obliterating NT Vince Wilfork, opening up a massive hole for Addai to stroll through on his way to the endzone. Marlin Jackson intercepted Tom Brady on the following drive, and Bob Lamey's now-famous, "INTERCEPTION! Marlin Jackson! We're going to the Super Bowl! WE'RE GOING TO THE SUPER BOWL!" still rings fresh in the ears of Colts faithful six years later.

The game was the biggest comeback in AFC Championship Game history. No team had ever rallied to win down 21-6 at the half of a championship game. It is also considered one of the greatest playoff games in NFL history. 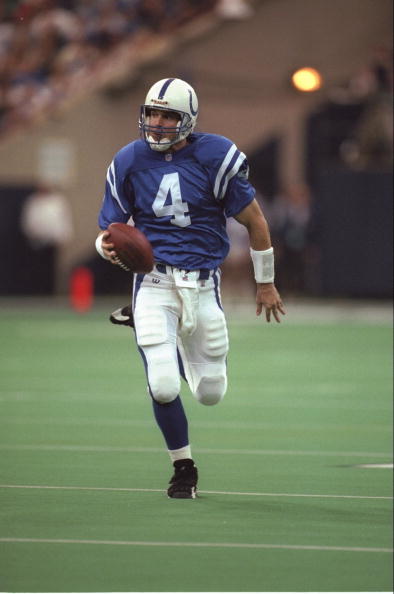 It wasn't until I started compiling this list that I realized: Wow! Two of the Colts signature comeback victories came against Dan Marino and the Dolphins.

This game gets ranked ahead of the 2006 AFC Championship Game because this was the beginning of the Cardiac Colts. For you youngsters out there, this period of time was important in Colts history. Without it, there is no Peyton Manning, and likely no Colts in Indianapolis for Peyton Manning to get drafted to. Prior to the '95 season, the Colts had made the playoffs just once since their infamous 1984 move to Indianapolis from Baltimore. The old RCA Dome and the downtown area were practically deserted on Sundays. If you wore Colts gear around town, people actually mocked you.

Trust me. It happened to me. Repeatedly.

Whenever some moron today tells me I'm "not a real fan" because I am critical of the team, that moron - or their father - was likely one of the idiots who mocked me for wearing a Colts hat pre-1995. Yes, I still cry myself to sleep thinking of that memory. I also wet the bed still at age 36.

Anyway, the game was one of the signature wins for Captain Comeback, Jim Harbaugh. The Colts were down 24-3 at the half only to come storming back in the third and fourth quarters. Harbaugh threw three tocuhdown passes in the second half; Two to Floyd Turner and one to Aaron Bailey. Harbaugh finished the day with 319 yards and three TDs, going 25-33. Colts kicker Cary Blanchard won the game in overtime on a 27-yard field goal.

This comeback helped propel the Colts to a 9-7 record that season and their first playoff birth in seven years. They went on to play in the AFC Championship Game against the Steelers that season, losing on the now-famous Aaron Bailey Hail Mary drop in the endzone at the old Three Rivers Stadium. 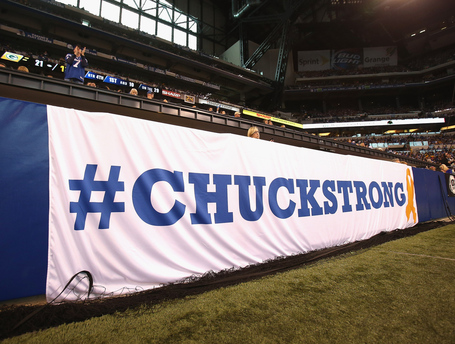 This gets ranked No. 2 because it is a wonderful story. This was more than just a team making a comeback. This was about a group of players and coaches wanting to win a game for their ailing leader, head coach Chuck Pagano.

As of this writing, Pagano is in an Indianapolis hospital, literally fighting for his life as he battles leukemia. The Colts comeback from being down 21-3 at halftime wasn't simply about winning a game and, hopefully, sparking something special for the near and distant future. It was about winning so that the game ball could be delivered to Pagano in his hospital bed.

For me, that's bigger than any playoff game, any championship trophy. That's why it gets listed at No. 2.

The 2003 Monday Night Football Victory Over The Buccaneers, 38-35 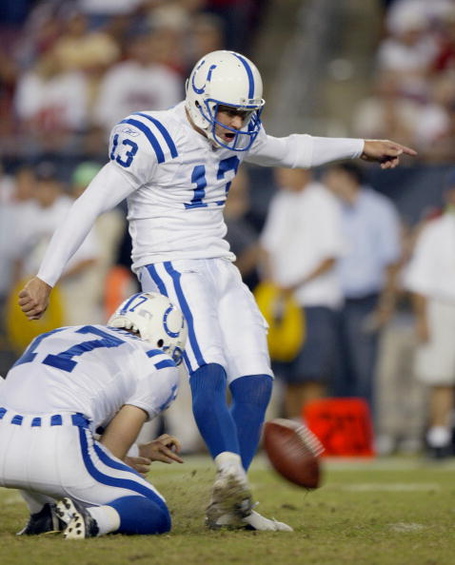 Remember when the Bucs were good? No? Well, way back in 2003, they were the defending Super Bowl champions and two years removed from firing the coach that had rebuilt them from the dumpster fire they used to be. That coach was Tony Dungy, and on a night that just so happened to be his birthday, he went back to Tampa Bay for the first time as head coach of the Indianapolis Colts.

During the game, Bucs receiver and overall blowhard Keyshawn Johnson (who is currently right at home as an analyst for ESPN's mind-numbing NFL gameday show) was seen on camera trash talking Colts receiver Marvin Harrison. Johnson was drafted No. 1 overall in 1996 by the NY Jets, but his career flamed out in New York because... well, Keyshawn was slow, loud-mouthed, and thoroughly overrated. Marvin Harrison was picked No. 19 in that same draft class, and in 2003 he was coming off a record-breaking season in which he caught 143 balls for 1,722 yards and 11 TDs.

On a routine three-yard completion in the first half, Johnson was recorded by MNF cameras mocking Harrison with, "See! That's how he get his catches!"

The Buccaneers jumped out to a 21-0 halftime lead, which then ballooned to 35-14 in the fourth quarter. Then, one of the most monumental comebacks in NFL history - if not THE most monumental - began. One of the catalysts for that comeback was No. 88 for the Colts, Marvin Harrison.

After Ronde Barber intercepted Peyton Manning and returned it 29 yards for a touchdown, the score was 35-14 after the extra point and the Monday Night Football announcers were practically singing "Turn out the lights." On the ensuing kickoff, Colts returner Brad Pyatt ran the kick back 90 yards to the Tampa Bay 12-yard line. Four plays later, on 4th-and-one from the Bucs three, James Mungro punched the ball into the endzone, and the score was 35-21 after the extra point.

The ensuing kickoff was an onsider, recovered by the Colts Indress Bashir. On first-and-ten from the Tampa Bay 43, Manning hit Harrison for 11 yards. Four plays later, on 4th-and-6 from the Bucs 28-yard line, Harrison smoked the Tampa Bay secondary and hauled in a 28-yard touchdown pass from Manning.

The Colts kicked the ball off and their defense held the Bucs offense to a three-and-out. Former Colts punter Tom Tupa kicked it away for Tampa Bay, and the Colts offense got the ball back with 1:15 left on their own 15-yard line. Three plays into that drive, Manning hit Harrison on a 52-yard bomb, setting up first-and-goal at the Bucs six. Two plays later, Ricky Williams (not that one, the other one) scored from three yards out.

The game went into overtime, where the play pretty much everyone remembers involved Mike Vanderjagt missing a 40-yard field goal only to have Bucs defensive stalwart Simeon Rice get penalized on the attempt for "leaping." The penalty moved Indy forward 11 yards, and Vanderjagt then barely nailed a 29-yarder to win the game, 38-35.

This comeback win was the true beginning of the Dungy-Manning Era Colts, who went on to win the AFC South division five years in a row. They also played in two conference championships, and won Super Bowl XLI. The Buccaneers still have not recovered from that MNF collapse. They have made the playoffs just twice in the nearly ten years since that defeat, and they have not won a playoff game since their Super Bowl victory in 2003.

Marvin Harrison finished his career 1,102 catches for 14,580 yards and 128 touchdowns. All those catches and touchdowns were with the Indianapolis Colts. He is still the NFL's single-season receptions leader (143 in '02) and sits at No. 3 all-time in terms of receptions, No. 6 in terms of yards, and No. 5 in terms of touchdowns. He should be a Hall of Famer one day.

Keyshawn Johnson finished his career with a team other than the Bucs. He has 814 career catches for 10,571 yards and 64 touchdowns. Keyshawn will never sniff the Hall of Fame.

If you have a different list, toss it in the comments below.