The Colts take on the Dolphins this weekend. In order to win, putting pressure on the 'Phins QBs is a must. Here's a look at how the Colts tried to make it happen last week and some ideas for success on Sunday.

Share All sharing options for: Colts Defense All-22 Breakdown: The Pressure Problem

Welcome to your weekly All-22 breakdown of the Colts Defense. First off, some observations from the game against our division rival Tennessee Titans.

The defense was only on the field for 23 plays in the second half. By far the least in a half so far this year. That's a tribute to both the defense making plays and shortening drives and the offense extending drives and running the ball with some authority.

The Kendall Wright TD should not have been. 1) There should have been an OPI flag. Cassius Vaughn had great coverage until Wright pushed off for separation. 2) The ball was not secure as Wright came to the ground. Should have been incomplete.

Jerraud Powers struggles in press coverage. He is improving and getting better as a Man-to-Man corner, but he is more successful when he leaves a bit of room to work with. He was targeted and beat consistently when pressed up against the Titans receivers.

We struggled to get pressure all day. The Titans plan was to get the ball out quickly and it kept the pass rush at bay most of the day. It was not the only factor though. My breakdown for this week shows that it is not just effort, but some really stage play design that may be effecting our pass rush.

I picked this play for a couple reasons. First, I am quite glad Cory Redding is playing again. He understands this defense and knows how to work within it. This play goes down as a sack for Drake Nevis, but Redding makes the play possible. 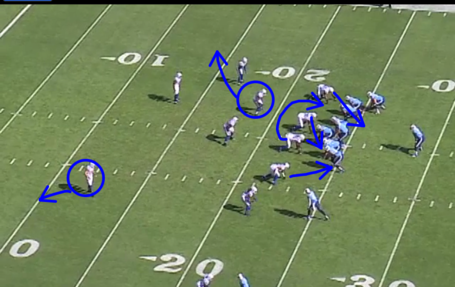 Check out the play design. Basic Man under cover 2 coverage. Redding and Nevis are have a stunt game going here. Redding engages the right guard and center. Nevis takes a step forward to lock in the other guard and then has a short path to the QB thanks to Redding. 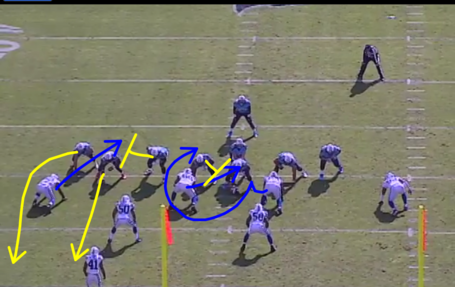 Now in the last picture, you can actually see the successful rush from Nevis that leads to the sack on the play. You can see the huge rush lane opened up by the great work along the line by Redding. The design is good as well leaving a player blocking no one and a rusher on a free path to the QB. 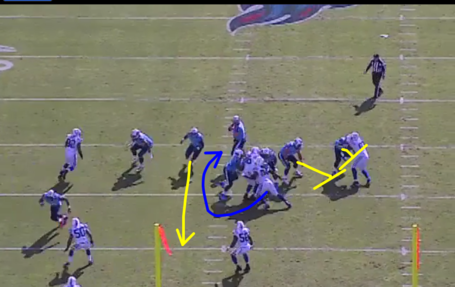 Unfortunately the design was no that good all game. I could tell that Manusky was trying to get pressure all day, but he got a little out there with some of his rush designs.

This would have been a great chance to get the Titans off the field. Manusky tries to dial up the pressure, but tips his coverage hand to the veteran Hasslebeck. 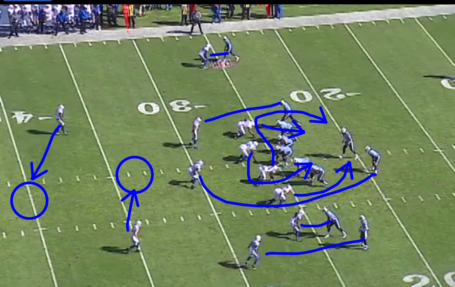 Look at all those lines from the defensive line. Hughes and Freeney are on straight paths. Nevis loops all the way around Freeney and Redding loops around Nevis. Crazy play that takes way to long to get pressure. 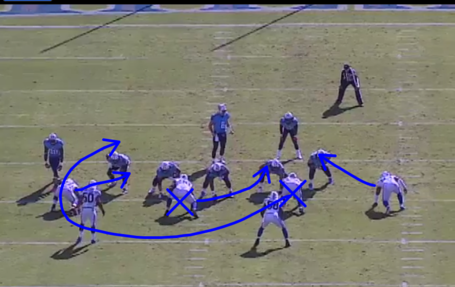 Look how far Nevis and Redding are asked to go. Seems insane to me. It also seems to give the defensive enough time to adjust to the rush and negate any confusion that may have been caused. 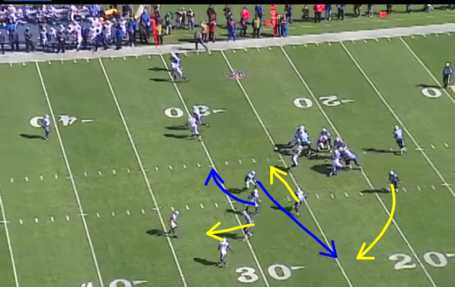 Check out the Titans play design. Easy completion here. With the motion to the stacked formation, the man coverage the Colts were using became easily beatable. The LB maned up on the back crosses paths with the CB in charge of the WR. This little rub route is something we used for years. The Titans execute it perfectly. The strange part of the play is the pressure design. Not a fan of that.
Here's another one that confused me.

Another great time to get pressure. 3rd and long is the time to pull out your best stuff. While the play did end up as a success for the defense, it's not because of the pressure on the QB. Check out design first. 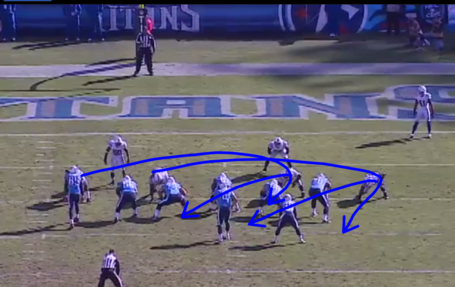 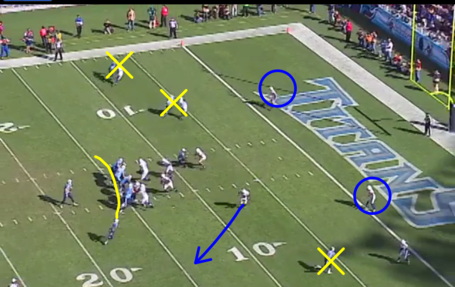 While it just happens that the coverage on the back end is good during this play. The rush takes way to long to get anything done. That's asking a lot of your defensive backfield.

What does this mean for the game this weekend?

Pressure is one of those things that could be a key to every game in the NFL. It's like saying that winning the turnover battle is important. In a league where passing rules, pressure negates that. Especially going up against the 'Phins QBs who have not been great under duress.

If you at the plays again, all of these rushes are from a 4-down defensive front. While I understand that Manusky is trying to confuse the block scheme of the offense, I think those long routes to the QB are not the answer. I would prefer to see backers press and then not come. Linemen move around and show overloads and then come from the opposite side. That creates the confusion, not designing rushes that take 5 seconds to develop.

As with each one of these breakdowns so far, I have seen positive things on the film. There are plays where we look like a formidable team. That play by Redding and Nevis is exciting and doesn't compromise the backend defense. We need more consistency, not just from players, but coaches as well.

One a personal note, I'll be at the game on Sunday! I want to see a win! Let's Go Horse!!!