Andrew Luck, Adam Vinatieri, and others shave their heads in support of their cancer-stricken head coach.

Yesterday, I spent the evening voting. Yes, I waited in line. Yes, the wait was worth it.

While waiting, I saw this tweet pop into view on my smartphone:

The link in the tweet went to this picture: 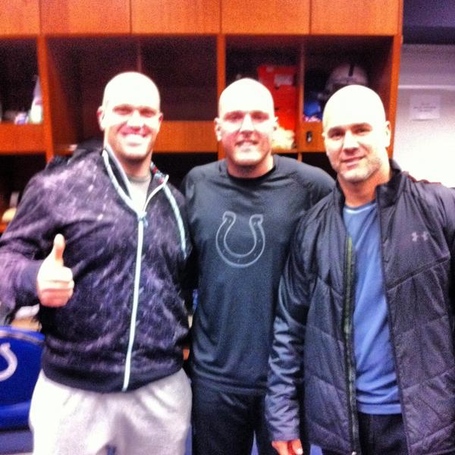 To support their cancer-stricken coach, Chuck Pagano, who showed off his nearly bald dome on Sunday when he gave a stirring post-game speech to his team following their 23-20 win over the Miami Dolphins. Pagano has had to undergo chemotherapy treatments since he was diagnosed with leukemia in late-September.

Recently, doctors confirmed the cancer is in remission.

Yep, that's right! Andrew Luck shaved his friggin head! I hope to god he kept the neckbeard so that he can look like some sort of Grimm Fairy Tales troll. When we get a picture of No. 12 with his freshly buzzed dome, we shall post it.

In all seriousness, it's very neat that players are doing this. The Pagano story, and the Colts success on the field, are both uplifting and inspiring. The Colts, in general, are the best story of this season.

Colts.com has video of the head shaving event.