The Colts met the Jaguars in Week 3 at Lucas Oil Stadium. A look back at that matchup gives us a clue about what to expect during Thursday night's prime time game. Stampede Blue's Eric Miller looks at what the Colts defense did and what they need to do to put this one in the win column.

Share All sharing options for: All-22 Breakdown: Defensive Lessons From The Last Colts V. Jaguars Game

I know I normally break down the most recent game. I was at the Miami game and was fairly pleased with what I saw. I will get to that one later in the week. I decided to jump back and look at the game we played against Jags during week 3.

This one should haunt Colts fans. Can you imagine being 6-2 at this point? We should be. We played the Jacksonville Jaguars in week 3 and were 80 yards and 0:56 and, as it turns out, 1 play away from winning the game. First some general comments about what I saw on the film.

On to some film breakdown.

Here is an example of good backside discipline and the defensive line winning a 1-on-1 matchup. First, a look at the defensive scheme on the play. 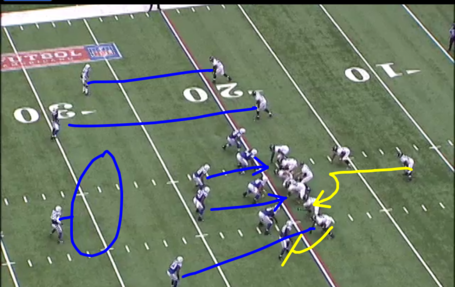 Look at Vontae Davis down at the bottom of the picture. His first responsibility is the TE on that side of the field. If that TE runs a route, he has that coverage. It is also key that the two ILBs fill their gaps well. 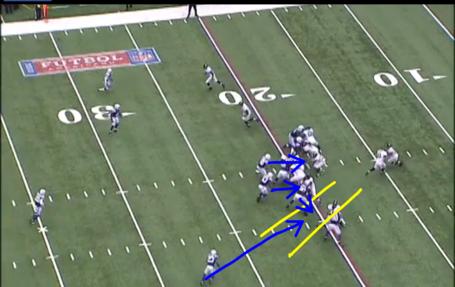 Here we see the TE stayed in to block the rushing OLB. The OT moved Cory Redding to the inside, opening up a cutback lane for MJD. Davis recognized that opening and made his way up to fill that gap. 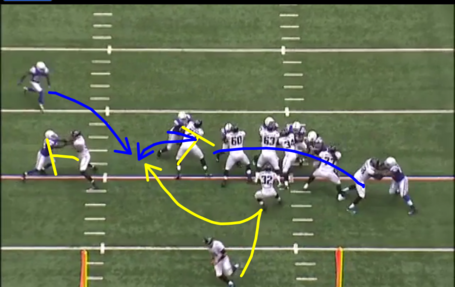 Davis fills the gap, Redding sheds the block, play stopped for short game. THIS is how we need to play defense.

This is an example how not to play defense. Similar concept to the previous play. It's Jerraud Powers at the bottom of the screen this time. Again, his first responsibility is to cover any receiver that comes out to his side of the field. His read is on the TE and WR to that side of the field. 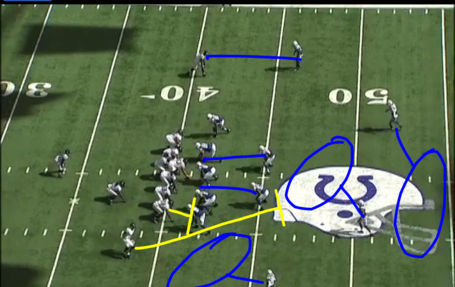 This time, Powers reads an outside run and comes around the outside of the line. As the TE and OT start on a double team on Redding, the FB comes and wipes out the OLB. The two ILBs try to fill gaps and the OT releases to the second level and the pulled guard from the opposite side opens a seam. Also check out the WR on the left side of the picture. He makes no move to the outside, but comes inside to block the safety. Even though you can't see Powers, he is unblocked on the outside. 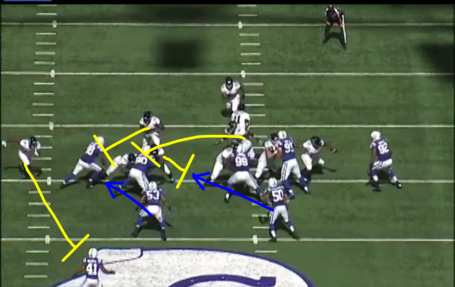 If Powers had read the WR correctly, he would have followed the WR to the inside and had a better angle on the play. Instead, Powers misreads the play and leaves a lane open. Result, touchdown Jags. 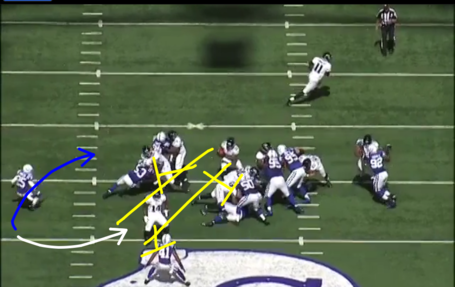 A little about play design here. Manusky sends a blitz here that rattle Gabbert. A look at design first. A basic alignment we'd used all day with 3 down linemen and 2 OLBs pushed up to rush. Both ILBs show blitz before the snap. Man coverage underneath with a "robber-1" concept in the secondary. 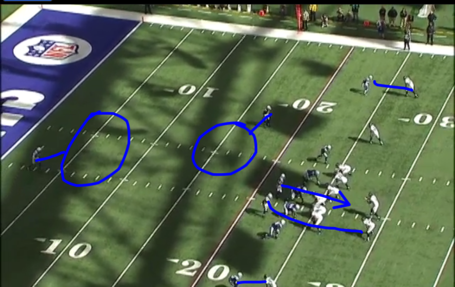 Here's a look from Gabbert's perspective. You can see the Colts have "outflanked" the Jags. 5 defenders that could rush v. 4 blockers on that side of the line. Good design. Where it falls apart for me is on the other side of the line. With the OLB rushing the passer, the TE gets a free release off the line. As you can see, no one is covering him. 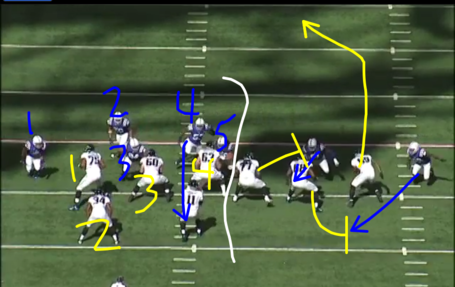 Let's look at the wide angle again. With the rushers bearing down on Gabbert, he has to make a snap decision. There are still 2 receivers wide open with one defender unsure of who to cover. If Gabbert had read the release of the TE, this play could have been a TD. 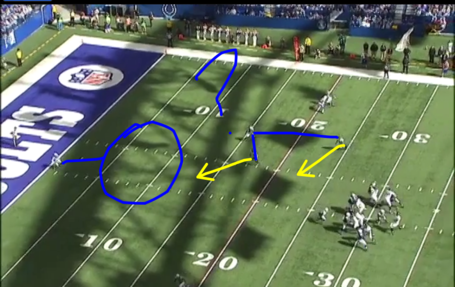 A better design would have let the OLB jam the TE at the line. We still would have had the advantage that allowed the free rusher and better coverage in the secondary. This play actually resulted in a defensive PI call that gave the Jags another 1st down, but it had the potential of being a better if the design was just changed slightly.

I realize this game will be totally different than the last. Powers and Davis are not playing. Angerer and Freeney are playing. MJD is out, but Jennings still worries me.

It was quite difficult to watch this game again. This is one that got away. We played well all game and just had a couple of lapses that ended up costing us the game. Visits to Jacksonville always worry me. Let's hope the Colts solidarity as a team helps lead them to a win.