All-22 Colts Defensive Breakdown - More Trends, Observations Of The Hybrid 3-4

Eric Miller from Stampede Blue finally posts a new All-22 breakdown looking both ahead and behind.

Share All sharing options for: All-22 Colts Defensive Breakdown - More Trends, Observations Of The Hybrid 3-4

I know what you are saying...sorry it has been so long. Family commitments over the Thanksgiving Holiday, the beginning of my busiest work month of the year (December) and a 6-month old with a head cold and an ear infection just ate up all my time.

Anyway, here's my plan for this article: First, just some general observations from the last few games. Then a breakdown of something new, something good, and something that we will see a lot of on Sunday.

First, let's look at a new formation we have been using during the past couple weeks and the play we ran out of it against the Titans. This formation is only used on 3rd and long situations. First, a look at the defensive alignment against Detroit. 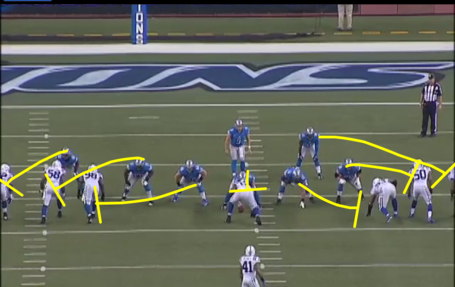 This is a look from the end zone and what the O-line would need to account for. Basically, we have a three-down set-up (Robert Mathis is standing in the picture above) and we walk all 4 LBs to the outside to show blitz. Here is it against Tennessee. 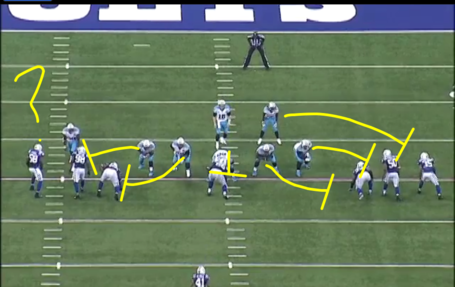 A unique look for a team that used to just sit in basic 4 down setup. In this picture it ever looks like we might have a man unblocked if all 7 come on the blitz. We haven't run that play though. Next, we see what the Colts scheme looks like. I see it as a cover three deep with only three of seven potential rushers actually coming. 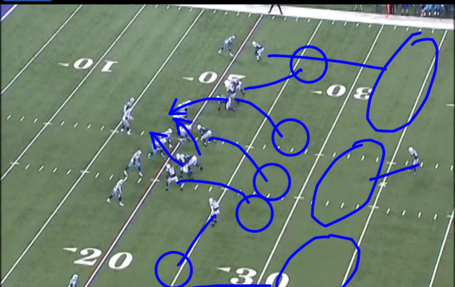 Finally, we see how the offense attacked this. By running the outside receiver on a skinny post, they find a window for a throw and potential completion. The good reaction to the throw by Vaughn saves a long completion. 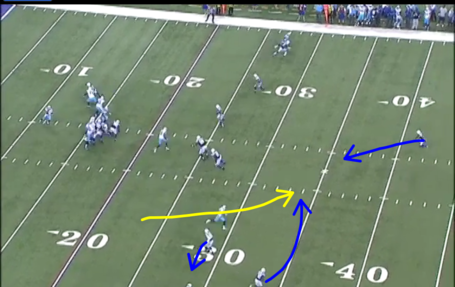 While this alignment might confuse the O-Line a bit, Is has not created pressure on a QB yet. I would like to see some variations used to keep the opposition guessing.

Next, let's take a look at one of those creative blitz packages I mentioned we have, but don't use often. Most of the time we line up in a 3-4 alignment and Dwight Freeney puts his hand on the ground before rushing. It ends up looking like a 4-3 that is just off center from the offense.

In this alignment, we have walked the middle LBs down to show a double A-gap blitz. With 6 guys in range to blitz, the back has to commit to helping out the left side of the O-Line before he does anything else. 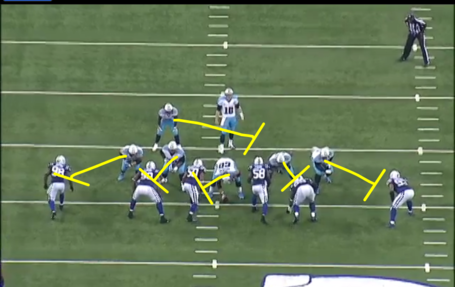 In the next picture, we see the Colts actual design on the play. Antoine Bethea comes on a safety blitz but waits until the offense has made it's initial adjustment to tip his hand. Freeney and Moises Fouku actually back off into soft zones and the right side of the O-line is overloaded by four blitzers. 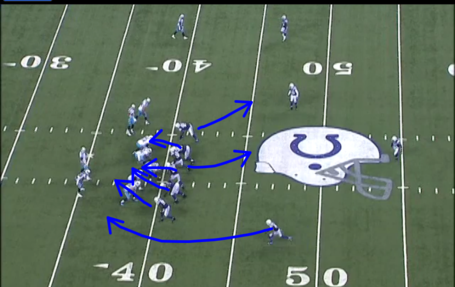 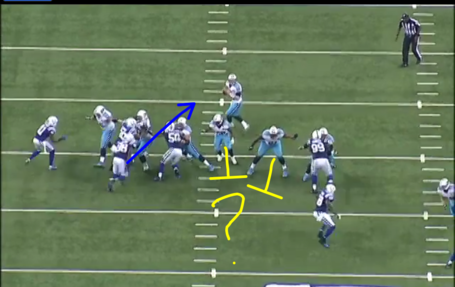 Since the back committed to helping the left side of the line, the overload on the right side allows Robert Mathis a free rush to the QB. If you go find this play in the game, Moise Fouku got called for holding on the play and the Titans still got a 1st down, but the design is good. With our lack of consistent pass rush, we need to be inventive.

Finally, we take a look at a play I am certain we will see many times on Sunday. We all know the Houston Texans love to pass off of play action with the roll-out. It was this play that lead to the infamous "Rosen-chopper" a few years ago. It just so happens that Tennessee ran their version of this play once on Sunday. Here's a look: 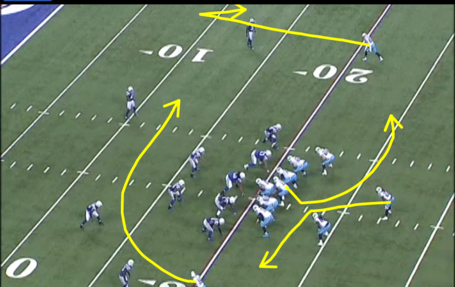 First, play design. Stretch left action. Key for the offense is to seal the rusher on the back edge so the QB has a place to roll out to. The flow of the defense will be to the right so crossing routes that move across to the left of the defense are tough to cover. Jerry Hughes is the defender assigned to drop back to stay underneath the crossing route and he actually does a good job during this play. 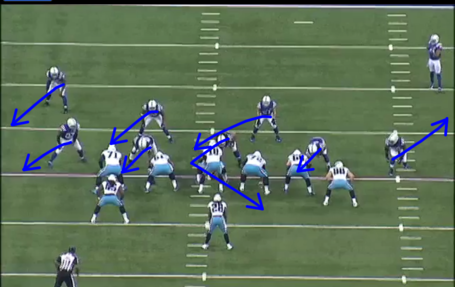 The key to this play for me is the person in at the end spot. In our 3-4 alignment, that player is not often asked to rush the QB. In this instance, if they can get pressure or even just contain on the QB, it could be a great defensive play. 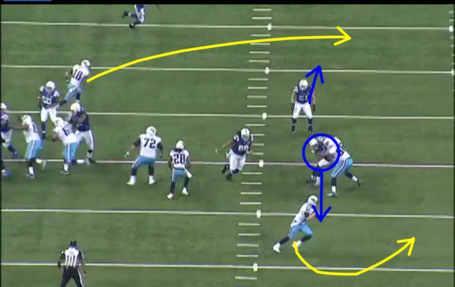 In this example you can see that the DE is getting pushed inside and Locker has a free run and clear passing lane to the outside. You can also see Pat Angerer looking at Chris Johnson in the backfield. This play actually makes him choose who he will cover, the RB releasing late or the crossing route behind him.

The Colts must have a plan for how to cover this. If they don't, it will be a long afternoon in Houston.