'OK everyone, smile awkwardly as we try to smooth this over...' 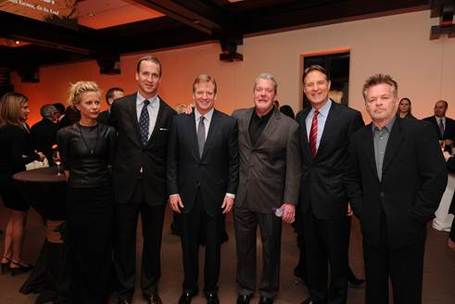 This photo, along with this posting on Colts.com, were the announcements Colts owner Jim Irsay said would be coming today in response to two doctors decreeing yesterday that Peyton Manning was medically cleared to play.

Peyton Manning, Jim Irsay and the entire Colts family remain close and unified as we continue to work through all the options that relate to his future with the Colts.

Yep, that's pretty much it. One sentence, and then a very weird photo from a Super Bowl party in Indianapolis last night featuring Irsay, Roger Goodell, former US Senator Evan Bayh, John Mellencamp, and... Meg Ryan? Yes, Meg Ryan. She's the blonde on the far left who looks as if someone farted. Meg and John 'Cougar' are an item, or so I'm told.

Anyway, nothing in this statement further explains Irsay's tweet last night which directly countered the statements made by Peyton's doctors. Irsay dumped this on Twitter last night at 1:30 am:

Peyton has not passed our physical nor has he been cleared to play for The Indianapolis Colts. Team statement coming on Friday.

The team 'announcement' today gave no elaboration on this, no update on Manning's true health, and no further insight into Manning's status with the team.

Basically, a waste of time, and an excuse to post a very bizarre photo showing Peyton looking about as thrilled to be there as his brother was to be drafted by the Chargers in 2004.