Stampede Blue At The 2012 NFL Draft

Share All sharing options for: Stampede Blue At The 2012 NFL Draft

I've settled into my seat (Section 6, Row KK) at Radio City Music Hall for the 2012 NFL Draft. Unlike last year, it looks like we have reliable Internet. I brought my 4G card, just in case. They're flashing Colts graphics across the screen now.

The big news around the draft floor is the potential for lots of trades tonight. Teams might move all over the draft map, including the Colts after they take Andrew Luck No. 1 overall. The teams being mentioned for first round trades are the Vikings, Jaguars, Dolphins, and Browns. There seems to be a consensus forming that Minnesota will take Morris Claiborne, but thy are also mentioned as a team that could move down. The Buccaneers are possibly moving up, hoping to grab Trent Richardson.

Basically, no one really knows what is going to happen, but the sense is there will be lots of movement. Don't expect this first round to go the way several conservative mock drafts have projected. Again, that's just the vibe and chatter I'm hearing in the building.

We'll have updates on the 2012 NFL Draft throughout the night. For now, here's a picture of me at the NFL league office earlier today in their fan room, which features a pic of a Colts fan with total and complete disgust on his face. Enjoy. 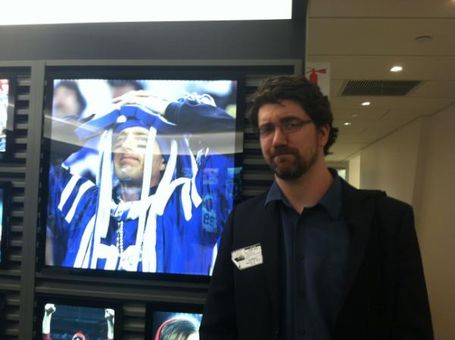