While Robert Griffin III refuses to take part in team-requested private workouts, presumed No. 1 overall pick Andrew Luck is more than willing to meet with the Indianapolis Colts today at Stanford University. Indianapolis Star beat writer Mike Chappell reports that Colts owner Jim Irsay is not expected to be in attendance at Stanford, but just about everyone else in the Colts organization is.

Yesterday, some news hit the wire from ESPN's Michael Wilbon, of Pardon the Interruption fame, that the Colts are still weighing drafting Robert Griffin III over Andrew Luck. I'm here to tell you that Wilbon's sources are wrong, and that today's workout is simply the last step in a decision-making process that has already been finalized.

The Colts will draft Andrew Luck No. 1 overall. Anything else you hear is total and complete garbage.

Listen, if you don't believe me, you can believe Bob Kravitz:

If you're wondering why Irsay hasn't publicly committed to Luck, or apparently hasn't told Luck he will be the guy, then you don't know Irsay.

He loves to inject drama into a story. At this point, he's just playing around. He's letting everybody work themselves into a froth, speculating that maybe, just maybe, the Colts will pull a fast one come draft night.

As sure as I can't dunk on an eight-foot basket, it's Luck.

And it should be.

Basically, what Kravitz is telling us is Irsay hasn't committed to Luck because he enjoys f*&king with us fans. I'm sure there is a nicer way of saying that, but I don't think it would be as effective.

Regardless of what Irsay's true reasons are for being coy, in the end they really don't matter. The Colts will draft Luck. They made up their mind doing so months ago, and if RG3 refusing to participate in a private workout didn't make their decision for them, then whatever Luck does to WOW them today will.

Get used to seeing this on Sundays: 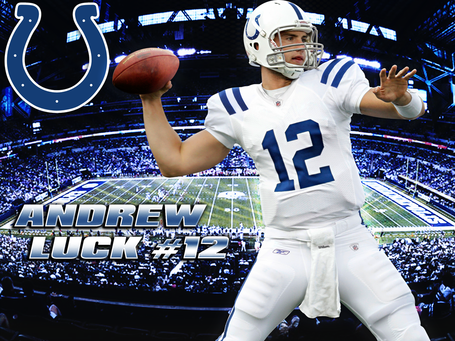