I don't normally get excited for stuff like this because, well, I'm not good at hawking somebody else's crap. Still, it is news when, for the first time in ten years, someone other than Reebok will be furnishing fans and players with NFL jerseys.

Today in the NYC borough of Brooklyn (where yours truly lives and works), Nike will unveil all 32 team NFL jerseys at an invitation-only event. Apparently, Colts defensive player Robert Mathis is on hand and will represent the team in Brooklyn.

In NYC with 31 Bosses from around the league for the EPIC #NIKETakeover!!!!! Thanks for picking me to Rep for the #BluFluCru #GoColtsDammit

Online pro shops, like this one through Colts.com, have already begun selling Nike apparel. Colts caps are provided by New Era.

So far, I have to say I like some of the apparel changes, though the whole "Bo Knows" thing (changing it to "Indy Knows") is dumb and very dated.

Keep in mind, Nike made those god-awful Oregon Ducks unis for the Rose Bowl. I guess it could be worse. It could be Under Armor.

[UPDATE]: I neglected to mention the time of the unveil, 11:00 a.m. ET. PFT has the first glimpse of a new logo and helmet for the Carolina Panthers. 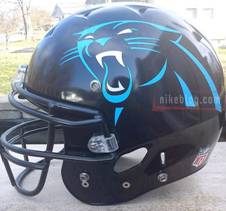