By buddy Travis Miller, head man at Hammer and Rails, forwarded me this lovely image during the A.M. hours: 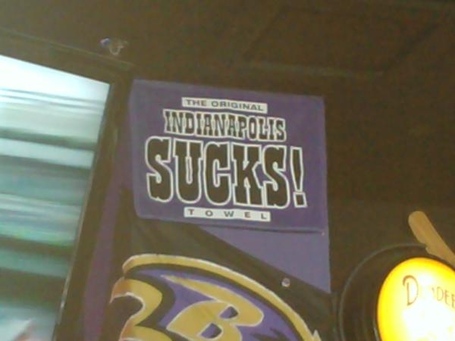 For me personally, my annoyance with Baltimore has tempered over the years. I've had the pleasure of talking to several, knowledgeable Ravens fans such as Bruce Raffel and Charles from Maryland, who chatted me up in a cozy little diner outside Richmond, Virginia back in 2010, during one of the worst blizzards to hit the area in decades. I've also read several books on the glory years of Baltimore football, the best being Mark Bowen's The Greatest Game Ever.

For many Ravens fans, their anger towards the Colts was cooled, somewhat, when Peyton Manning was the quarterback. Manning is the closest thing this league has seen to John Unitas since... well, since John Unitas.

In my not-so-humble opinion, guys like Joe Montana, Warren Moon, Steve Young, Troy Aikman, Dan Marino, and John Elway were all inferior quarterbacks to Unitas. In fact, I'm convinced Unitas could play in today's game if he were cloned and brought back, Jurassic Park-style.

However, with Peyton gone and Jim Irsay (who requires a police escort every time he enters the Baltimore city limits) front and center as the head of the franchise once again, Baltimore probably will return to their frothy hatred of Indianapolis for stealing their beloved Colts.