Share All sharing options for: Reggie Wayne Shows Up To Colts Training Camp In A Humvee, Wearing Military Fatigues [UPDATE]

We've seen Reggie Wayne make a big show of his arrival to training camps in the past. One year, he showed up driving a dump truck while wearing a hard hat. Another year, he literally took a cab from Indianapolis all the way to the camp facilities in Terre Haute (three hour drive for some) because his buddy, Edgerrin James, had his driver's license suspended.

This year, Reggie decided to show up to Anderson University wearing military fatigues while riding in an Army Indiana National Guard Humvee. He also seemed to have military personnel with him when he arrived.

As he got out of the Humvee, he saluted the media.

From the Fort Wayne News-Sentinel's Reggie Hayes, via Instagram: 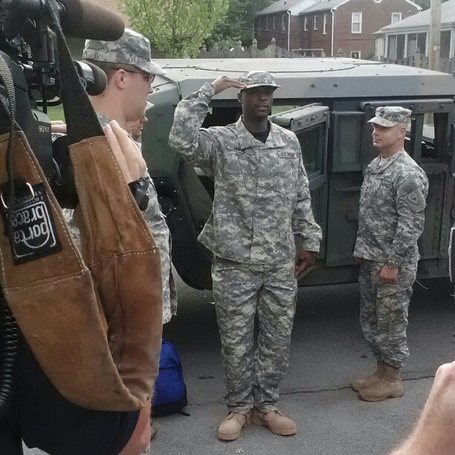 Yeah, they might have a crappy season. They might bumble and stumble all over themselves as they work to rebuild these "new era" Colts. However, fun little moments like this one should not be lost. Even grumpy complainers like me find this sort of stuff just as important as the games themselves.

Remember, it's football, people. We're all supposed to be having fun.

Reggie Wayne was with the Indiana National Guard recruiting command. Wants to make sure to say he's honoring our soldiers. #Colts

From The Herald Bulletin's George Bremer:

Wayne arrived with members of the Indiana Recruiting Command and 38th Airbourne Command out of Shelbyville. twitter.com/gmbremer/statu…