Share All sharing options for: Andrew Luck's 'Art' Sells For Bucks In eBay

Andrew Luck was an architect major at Stanford.

Impressive, especially if you have a mild or even passing understanding of the field. Plus, Stanford isn't an easy school to get into. It's, like, a real university, not an SEC school or anything like that.

Anyway, just because Andrew Luck is probably skilled enough to design and construct a building doesn't mean he can draw on. Recently, Darren Rovell (formerly of NBC, but now back with ESPN) tweeted that this crappy drawing {pictured below) of Lucas Oil Stadium was made and signed by Andrew Luck. 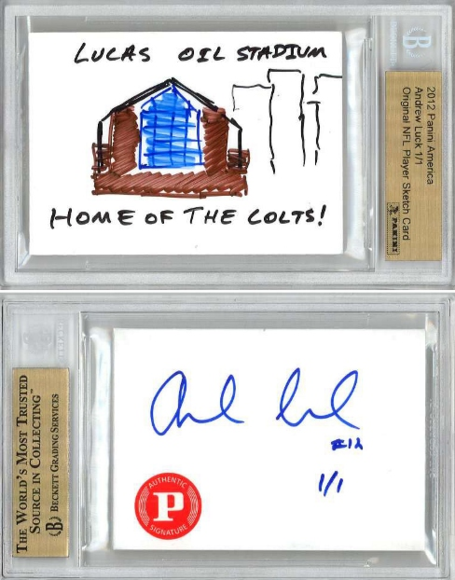 Then, somebody put the signed, crappy drawing on eBay. Not long after, somebody else bought it... for $1,500.

The buyer was likely someone who went to an SEC school.

Jokes and SEC digs aside, Luck might be a protege when it comes to playing quarterback, but he could probably use a few more art classes if he wants to sketch future images of Lucas Oil Stadium. My cousin's 10-year-old draws better than that!