Share All sharing options for: 2012 NFL Week 4 Pick of the Week: Panthers At Falcons

[Editor's Note: Stampede Blue welcomes new writer Christopher Price into the fold. Christopher knows a thing or three about sports betting... ask Vegas. You should listen to him if you, you know, hang with degenerate gamblers, and stuff. -Brad] 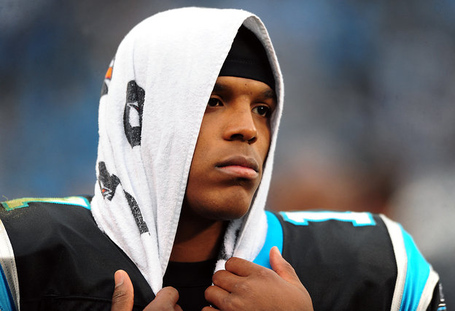 Pick of the Week: FIVE STARS!!!

Let me start this by asking what else the Atlanta Falcons (3-0) have to do to get the credit they so rightfully deserve? Well, I suppose crushing the lowly Carolina Panthers (1-2) couldn’t hurt, right?

It’s funny, because every time I hear someone discussing this game in favor of the Panthers (both of the people I’ve heard speak such ridiculousness), all I hear over and over is how great of an athlete Carolina’s QB Cam Newton (78.3 QB Rating – 798 Yards, 2 TD’s 5 INT’s) is and/or can be. Great, good for him… now sit back and let me tell you a little tale of Cpt. Ryan and his close friends: Mr. White, Sir Turner, Mr. Jones, Sr. Gonzalez and company.

You know, I won’t insult your intelligence and will assume you already are aware of the damage that the NFL league-leading "Matty Ice’s" (114 QB Rating – 793 Yards, 8 TD’s, 1 INT) tends to do - especially when at home. I’ll also assume you understand just how terrible Carolina’s rushing defense is at the moment (27th overall, allowing 139.3 YPG). Hell, don’t even get me started on Atlanta’s receiving core… I mean, who in the holy hell do you choose to cover?!

All that aside, what I think will be the key to dismantling the Panthers this week is the absolute dominance Atlanta’s defensive secondary has shown over the past three games. Right, Peyton? Together, DB’s Samuel, Robinson and DeCoud have combined for 7 interceptions and held Philip Rivers’ (86.5 QB Rating – 688 Yards, 4 TD’s, 1 INT) usually high-powered passing game to a measly 173 yards, with 2 interceptions coming last week, holding a team that was averaging 30 points-per-game to merely a field goal… in San Diego, no less.

Ok, ok… I guess I should at least be less biased and give you some feedback on what Carolina has going for them. For starters, RB Jonathan Stewart (51 Yards, 0 TD’s) is returning from injury for Sunday’s game. And… ummm… well… it looks like we covered all of the positives. That was brief.

You have to take Atlanta to cover in this one, especially being an absolute turning point for this franchise to look like a powerhouse, even if it is against Carolina. These numbers are just like Shakira's hips, gentlemen… they just don’t lie!

Just So Ya’ Know: