Every week, Stampede Blue's Josh Wilson will take an in-depth look at Andrew Luck's game from the previous weekend. Today we look at his performance in the seventh game against the Denver Broncos.

No matter what Luck says about this being a team effort and just another game and not every worrying about replacing Peyton Manning, the pressure undoubtedly was there. Indianapolis' love affair with Peyton was well documented last week, and it was on display again Sunday night. We also saw that Peyton still loves Indy, too. On this night, the past and the present collided. Manning vs. Luck. Colts vs. Broncos. No matter what Luck said, there was a ton of pressure on him in this game. If he lost it, it would make it even harder than it already was to move on from Peyton Manning. If the Colts lost, the questions of whether or not they made the right decision going with Luck would become even louder. It was unfair, yes, but Andrew Luck needed a big game on Sunday night to prove himself.

He showed up big time.

He threw three first half touchdown passes to give the Colts a 26-14 halftime lead, including leading a two-minute drill at the end of the half. In the second half, he added a rushing touchdown and finished the game out, leading the Colts to a massive 39-33 victory.

Luck's four total touchdowns tied a career high and Luck's win was the best of his career so far. In some ways, the torch was passed on Sunday night. Cris Collinsworth said after Luck's rushing score that the game was "a coming out party for a guy who didn't need it." He said earlier, when Luck threw a touchdown pass to Coby Fleener right before the end of the first half when people wondered if he would spike it and with the defense not yet set: "that's so Peyton Manning, isn't it? ... for a second year player, this guy is amazing."

Andrew Luck never ceases to be amazing. Playing on the biggest stage of his career, he didn't let it phase him one bit. In fact, he elevated his play. In the first six games of the season, Luck was absolutely phenomenal, scoring 9 total times. In this one game, he scored 4 times. He went up against his predecessor and the man who is undoubtedly the league's best quarterback - and he won. He matched Peyton Manning throw-for-throw, and then some. Luck brings a whole new dimension to his game that makes him nearly impossible to defend: he's the league's most efficient running quarterback. Not only can he match Peyton in terms of throwing ability, but added to his ground game he becomes truly special.

At the game Sunday night, one of the many signs at the game read "12 is the new 18." If anybody ever will be, it's Luck. And on Sunday night, in a game that it felt like everybody was watching, Luck put on a show. Luck is Indy's quarterback now and for the future, and Colts fans really got lucky with that one.

"I never viewed it as replacing Peyton," Luck said the week before the game. "I just viewed it as an opportunity to play quarterback in the NFL. It just so happens one of the greats of all-time was here before me." He has said before that he's not trying to replace Peyton, he's just trying to be himself and be as good as he can be.

And it appears that Andrew Luck is even better than anyone thought.

Number of Drives: 17 (including one at end of game with just one play, a kneel down)

Number of Plays: 71 (including one kneel down) 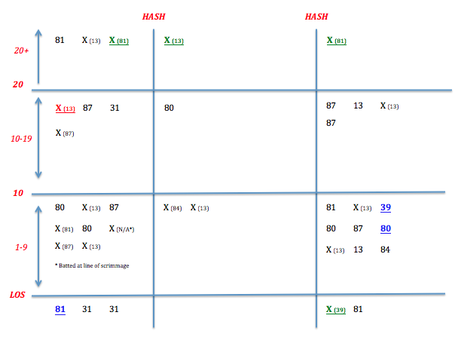 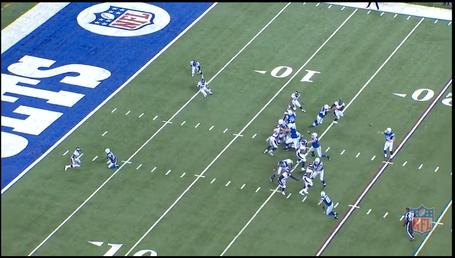 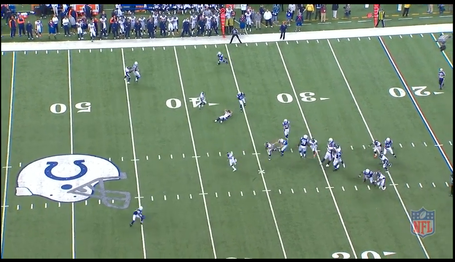 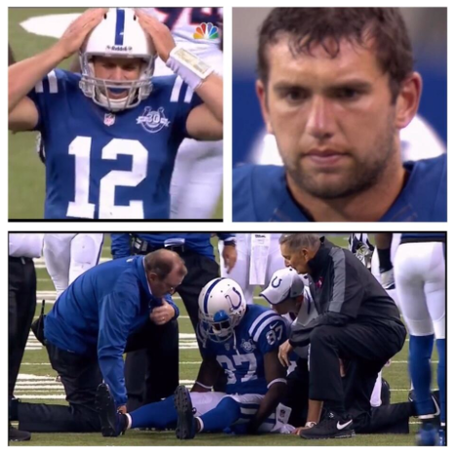 "[The video tribute] ended the Manning portion of the program. The rest of the night belonged largely to Luck, whose preternatural maturity and unpretentiousness calls to mind a younger Manning. Luck, the second-year pro out of Stanford, threw for three touchdowns and ran for another in a 39-33 victory against the Broncos."

"Let's not forget, for all the emotions that Manning had to be feeling returning to his home of 14 years, Andrew Luck was feeling as much or more pressure as the heir apparent. He finished the game with 228 yards, three touchdowns and no interceptions and added another 29 yards rushing, including at least one critical third-down conversion and another touchdown."

"Luck finished mistake-free (21 of 38, 228 yards, three touchdowns, no interceptions or turnovers), and didn't appear to be affected either before or during the game by the magnitude of it. "I didn't see anything out of the ordinary from what I always see with Andrew,'' said Fleener. "A lot of quarterbacks, I guess, would feel they have to do something out of the ordinary on a night like this. But Andrew understands it's going to be his play on the field, and nothing else, that will determine his success."

"And that's why Indianapolis should feel like the luckiest city in the NFL this morning."