Every week, Stampede Blue's Josh Wilson will take an in-depth look at Andrew Luck's game from the previous weekend. Today we look at his performance in the ninth game against the St. Louis Rams.

For almost all of his time in Indianapolis, Andrew Luck has been so incredible I don't even know what to say. He has made all of the throws and created plays out of nothing with his running ability. He been an incredible leader of this team and has led them to numerous game-winnning drives and fourth quarter comebacks. He has been one of the most incredible and amazing players to watch in the NFL the past year and a half, and I have had nothing but good things to say about him.

Not so today. I'm not going to sugarcoat his performance against the Rams: he stunk.

The offensive line allowed a ton of pressure, the receivers dropped passes, and the Colts all but gave up on the run - yet Andrew Luck was errant as well. I counted six passes that were clearly high or overthrown that were incomplete (so not including the ones that were high and caught). I counted four others that were just plain bad passes that were off target that fell incomplete. And those were just the obvious incompletions.

Operating out of an offense that is as close to ideal that the Colts are going to get this year, using quite a bit of no huddle and throwing it a lot, Andrew Luck didn't step up to the challenge. The Colts turned the ball over five times on Sunday, and four of them were by Andrew Luck. He matched his season total through the first eight games combined with three picks on Sunday.

And here's the thing that really stood out about Andrew Luck: he looked rattled. He didn't look comfortable. Chalk that up to the offensive line or the loss of Reggie or whatever, but it was something we saw for really the first time last week against the Texans and then more so on Sunday.

We knew the loss of Reggie Wayne was going to be difficult because we were wondering who Andrew Luck was going to throw to, but so far he has been inconsistent on even getting the ball to them in the first place. Last week an incredible comeback masked the poor play, but this week there is no such comeback. Andrew Luck was bad on Sunday and it was quite stunning how many plays he left on the field.

His team didn't help him out at all. But Andrew Luck didn't help himself out either. You can make excuses all you want, but that won't negate Luck's bad performance.

As FOX Sports' Chris Myers said while calling the game on Sunday: "even Superman has days where he's just kind of like Clark Kent."

Number of Drives: 12 (not including the drives (1) Matt Hasselbeck led)

Number of Plays: 62 (not including the snaps Matt Hasselbeck took) 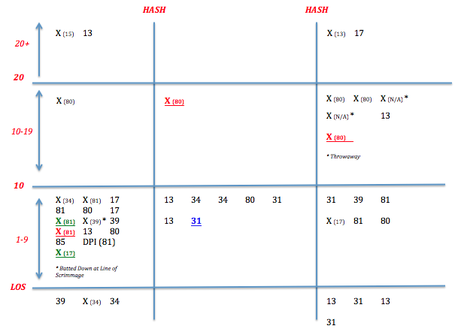 Peter King in his Monday Morning Quarterback, under the section of what he didn't like this week:

"Andrew Luck, who threw a bad end-zone interception to Trumaine Johnson and, in general, had one of the roughest starts of his young career."