Every week, Stampede Blue's Josh Wilson will take an in-depth look at Andrew Luck's game from the previous weekend. Today we look at his performance in the eleventh game against the Arizona Cardinals.

For much of the past month, the Indianapolis Colts - currently first place in the AFC South by two games - have looked like the worst team in football. At least, that's how they've played. In the first halves of the last four games, they have been outscored 93-9.

It's easy to find blame wherever you look: the defense, the offensive line, the wide receivers, the coaches - pretty much any area you look at could be blamed at least in part for the recent struggles, and that includes the quarterback.

Andrew Luck hasn't been at his best in recent weeks, although if you ranked the people most at fault for the failures in the past month, Luck's name would be at or near the bottom. And on Sunday against the Cardinals, we saw perhaps the clearest example yet how Luck hasn't been great but how it most definitely isn't him and that it is impressive what he is doing despite no help.

On Sunday Luck was pressured constantly and forced to roll out numerous times, including times where he had no choice but to throw the ball away. I counted four passes that I thought should have been caught but that weren't, and the Colts couldn't run the football to take the load off of Luck either. He got absolutely no help whatsoever, and to add to that his defense allowed a bunch of points.

At the same time, Luck made a terrible throw and decision that resulted in a pick-six for the Cardinals, showing that he still isn't completely free of blame. But it is totally unfair to blame him for the Colts struggles, and Sunday we saw why - his team hasn't helped him out at all.

On Sunday, though, they lost, and it showed perhaps better than any other game this year just how much Andrew Luck has to carry this team and just how hard that is. 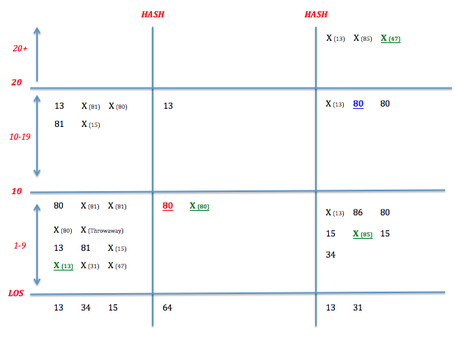 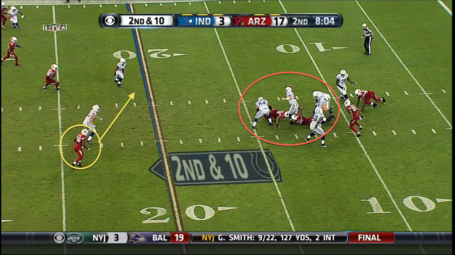 (note: the above two tweets are in reference to the interception Luck threw)

(note: it didn't end up that way, but at halftime it was true. 39.6 is the passer rating for going 0 for 1, which Fitzgerald did.)